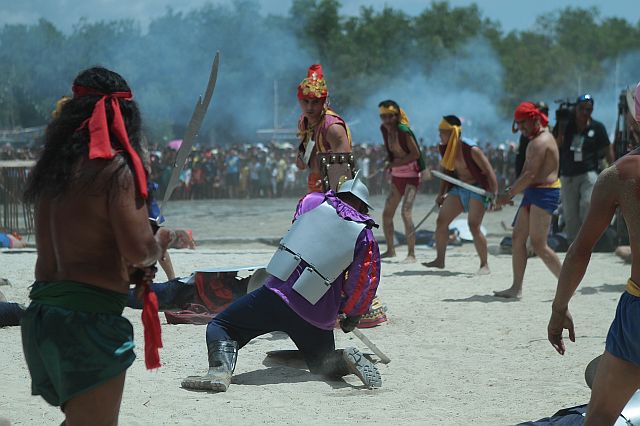 BATTLE OF MACTAN: Ejay Falcon played the role of Datu Lapu-Lapu while Matt Evans acted as Portuguese explorer Ferdinand Magellan in the reenactment of the Battle of Mactan at the Liberty Shrine in Lapu-Lapu City on April 27. (CDN PHOTO/FERDINAND EDRALIN)

IT was a star-studded reenactment of the Battle of Mactan on Wednesday morning, drawing thousands to the Liberty Shrine in Lapu-Lapu City.

The crowd grew rowdy towards the end of the reenactment as they wanted to get closer and take selfies with the celebrity casts, but overall, it was a successful culmination of the festival, said Manatad.

Notable improvements were seen in this year’s reenactment, such as the use of colored smoke when the natives prayed before the altar of their anito (god). The crowd cheered as Mactan chieftain Lapu-Lapu, Reyna Bulakna and their followers celebrated their triumph over Magellan and his men and offered dances to their anito.

Michael Thane, 26, a German volunteer missionary of Christ for Asia that sponsors an orphanage in Guadalupe, Cebu City, commended the city government’s initiative of honoring and remembering Lapu-Lapu as a great hero, saying the festival was very instructive to foreigners like him.

It was the first time for Falcon, Evans and Padilla to play their respective roles and thanked the city government of Lapu-Lapu for the opportunity to do so.

Mayor Paz Radaza challenged each Oponganon to be an everyday hero by just being a good and law-abiding citizen. “Our challenge in the modern day is to fight illegal acts and nurture our children towards a better community,” she said.