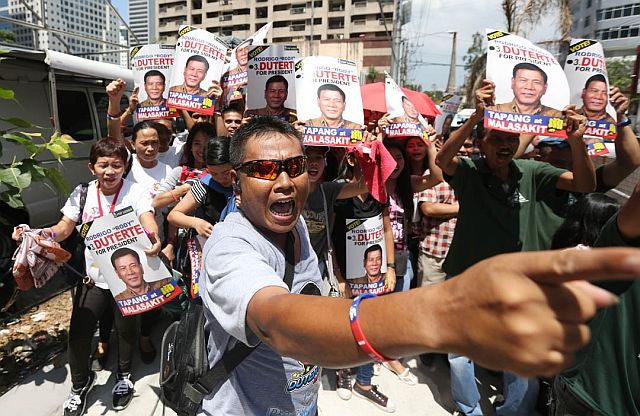 Supporters of Davao City Mayor and presidential candidate Rodrigo Duterte denounced what they described as “orchestrated, virulent” attacks against him, saying they expect it to intensify as the May 9 elections draw near.

In a statement sent to media outlets, Leoncio Evasco Jr., campaign manager of the Duterte for President movement, said both urban and rural communities are being flooded with posters warning people not to vote for the mayor.

“(These posters warn that) he will demolish squatter communities, that he will declare martial law and will do what the majority of the people railed and rallied against governments that ran back during (the Marcos regime),” he said.

Evasco said the mayor’s opponents are “using government machinery and resources to frustrate the will of the people” and called on supporters to close ranks and protect their votes for him.

Marc Canton, deputy campaign manager of the Cebu for Duterte Movement, said in a statement that the mayor didn’t lie and hide any bank accounts contrary to the allegations raised by Sen. Antonio Trillanes IV.

“Mayor Duterte complied with the request only to be stymied by banking procedures. And he actually had a waiver already attached to his Statement of Assets, Liabilities and Net Worth (SALN). Is this the action of a liar, someone who intended to keep things hidden from public notice?” he said.

Canton said while they agree with the pastoral letter of the Catholic Bishops’ Conference of the Philippines (CBCP) calling on the faithful to shun “morally reprehensible candidates,” they take comfort in Pope Francis’ statement at a Mass at St. Martha’s House exhorting Catholics not to call “others sinners, believing themselves to be righteous.”

The camp of Sen. Grace Poe, in a separate statement sent by its campaign manager Rep. Ace Durano of Cebu’s fifth district, said they are heeding the CBCP letter.

“In the midst of the contest for the best platform, debates of ideas and exchanges of tirades, we find in the words of the Church that what matters are the basic human elements of conscience, dignity and abiding faith,” the statement read.

The Poe camp also said they “have shunned mudslinging and kept the level of debates on issues.”

The Cebu for Roxas and Robredo Silent No More joined the calls for Duterte to tell the truth on his bank accounts.

“Just like Mar Roxas, (he should) sign a waiver for purposes of transparency,” said Dr. Mila Tolentino, the group’s spokesperson.

In yesterday’s 888 News Forum, Cebu City council candidate Jun Alcover warned that a Duterte presidency will cause chaos in the country.

A Team Rama candidate and known anti-communist advocate, Alcover voiced alarm over Duterte’s plans to form a coalition government with Jose Maria Sison, founder of the Communist Party of the Philippines.

Read Next
Honoraria for Cebu City BEIs to be delayed