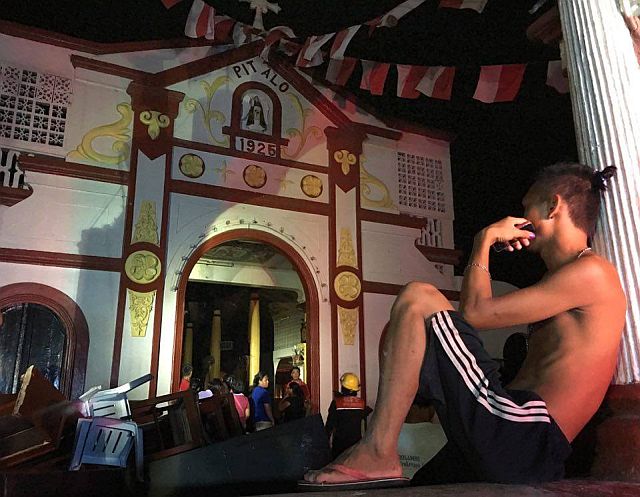 A devotee looks at what remains of the San Vicente Ferrer chapel in Pitalo, San Fernando, which was gutted by fire yesterday afternoon. (CDN PHOTO / TONEE DESPOJO)

A couple lit nearly 5,000 candles in thanksgiving for healing grace granted through the intercession of their patron saint San Vicente Ferrer at the heritage chapel dedicated to the saint in Pitalo, San Fernando, Cebu.

But the flames from the candles went out of control and lapped at the painted wood structure nearby, which then caught fire until the entire portion of the chapel near the altar was totally destroyed.

From the chapel, the fire quickly spread to the neighboring houses, destroying at least 13.

They lighted 49 packs of candles, representing the weight of 49 kilos the man lost before he was cured of cancer. Each pack contained 100 tapers, or a total of 4,900 candles.

Upon learning of the tragedy, many devotees shed tears of sadness and regret. But there were no feelings of rancor against the couple who lit the candles in gratitude for the intercession of San Vicente Ferrer for healing.

“I too am a witness of the miracles endowed by God through the intercession of San Vicente Ferrer,” said renowned iconographer Clodoveo Vicente Nacorda.

He said he was afflicted with tuberculosis as a child and his father would bring him to Pitalo to visit the image of San Vicente Ferrer, lit candles and hear Mass every Sunday.

“My parents actually entrusted me to the care of San Vicente Ferrer; that is why my second name is Vicente”, said Nacorda.

He wept upon learning of the fire yesterday.

Another devotee, Raychia Padilla, a computer engineer from Cebu City, shared that since childhood, her mother would bring the family to the chapel in Pitalo because they believed that San Vicente Ferrer is a miraculous saint.

“We would always go to the church especially if there were prayers we wanted to be answered. I grew up knowing him as a giving saint,” Padilla said in Cebuano.

Like Nacorda, she would always find ways to go to Pitalo, San Fernando during the fiesta of San Vicente Ferrer to join the procession and hear Mass.

Lydia Semilla, on the other hand, brought her youngest son during his birthday to the San Vicente Ferrer chapel to hear Mass and light candles.

Her son suffered from partial complex seizures when he was 11 years old and had to be hospitalized every two months.

She attributes her son’s greatly improved health to the intercession of San Vicente. He is now 19 and they had planned a trip to Pitalo on May 11, his birth date. She burst into tears after hearing of the fire that gutted the chapel.

Chapel caretaker Vicente Jerbabuena said the fire, which started at around 4 p.m. yesterday, burned the back portion of the altar and the San Vicente Ferrer statue facing devotees who come to offer candles.

Neighboring residents managed to save the second statue facing the churchgoers. Both images stand back to back at the head of the chapel.

The chapel’s altar and the roof collapsed. The huge cross at the left side of the chapel fell and the feet of the crucified Jesus were burned. Only the concrete walls and columns of the chapel remain standing.

The religious images and statues were saved by the residents and devotees.

SP01 Rolando Bastida of the San Fernando Police Station said he learned that the residents in the area did not immediately call the fire department as they tried to put out the fire using pails of water.

The fire victims will be evacuated to the gym in the town, Alicaya said.

Episcopal Vicar Msgr. Esteban Binghay said while the edifice is called by the people as a church, in reality, it is just a chapel which is part of the San Isidro Labrador parish in Poblacion, San Fernando.

Binghay said Mass is held every Sunday, officiated by a priest from the main parish. No priest stays in the chapel, he said.

Devotion to San Vicente Ferrer in Pitalo started in the late 1800s when the village was saved from an epidemic through the intercession of the saint.

San Vicente Ferrer was a Dominican friar from Valencia, Spain, who gained acclaim as a missionary and a logician. He is portrayed as a saint with wings because he is said to have been endowed with the power to be in several places at a time.