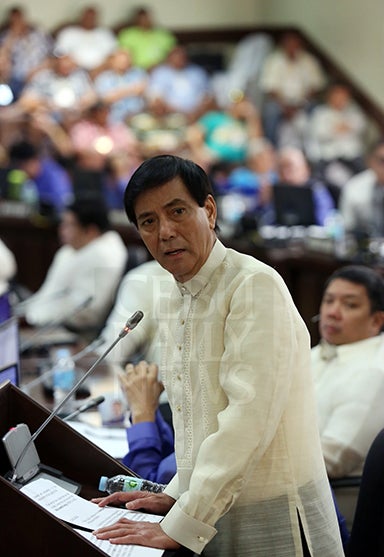 Photos showing an employee of the Bids and Awards Committee (BAC) at City Hall with a stack of green cards on her table were sent to reporters earlier.

“I have not allowed that and that should be stopped. The green card is supposed to be done already in the barangays, not in the office,” Rama told reporters.

Some of the green cards were distributed to the barangays.

The card shows the complete name of a voter, his or her address, his or her precinct number and cluster number.

The words “akong ‘boto’ dili mapalit” (my vote can’t be bought) is imprinted on the card along with the photos of Rama, Vice Mayor Edgar Labella and

Team Rama congressional candidates Alvin Garcia (north) or Councilor Gerardo Carillo (south), depending on which district the cards are distributed.

On the other side of the card is a complete list of Team Rama candidates including those for councilors as well as Vice President Jejomar Binay and Sen. Gregorio Honasan of the United Nationalist Alliance (UNA).

It also has a list of emergency numbers of the Cebu City Command Control Center. The sender of the photos identified the employee as Amelia Abi-Abi.

The sender alleged that the employee was using government hours and resources in “finishing” the cards for distribution.

Sought for comment, Abi-Abi denied that she was making the cards during office hours.

“Gipadala ra to sa akoa. Ako lang pud gipanguha daan ang para sa ako ug sa akong pamilya (It was just sent to me. I just took the cards for me and my family),” said the 58-year-old administrative aide.

Abi-Abi said she was asked by one of Team Rama’s volunteers to give the cards to leaders in their barangay in Calamba for distribution last week.
Former city councilor Joey Daluz, Team Rama’s campaign manager, also denied the allegation.

“It’s our volunteers in the different barangays that are doing and arranging all of that. There are no employees involved during office hours,” Daluz said.

Read Next
250 attend Mass for RoRo