6 QUALITIES OF A LEADER 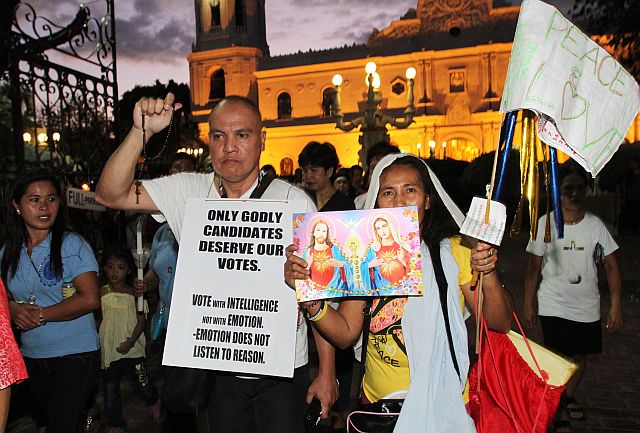 Lifestyle, accomplishments, reputation, identity of supporters, care for environment, and relationship with God.

These are the six primary areas that Cebu Archbishop Jose Palma said voters must seriously scrutinize when electing the country’s national and local leaders on Monday.

“Let us all be serious in choosing our leaders. Anything contrary to this is not Christian,” he said during a Mass at the Cebu Metropolitan Cathedral late afternoon yesterday.

Around 200 people attended the Eucharistic celebration and Penitential Walk for “clean, honest, and peaceful” elections.

Priests, seminarians, catechists, members of lay organizations and movements joined the prayer walk that began and ended at the cathedral.

They brought lighted candles and prayed the rosary while walking along the streets of downtown Cebu City.

In his homily during the Mass, Palma urged the faithful to pray and discern before voting.

“We’ve heard the candidates speak during debates and media interviews. We now know their plans and programs. Let us examine in a prayerful manner who we should vote to lead our country. We need guidance from the Lord,” he said.

The 66-year-old prelate encouraged people to sanctify the election process as well as the field of politics.

“Exercising our right to vote is a sacred duty. It shows our love, not just for our country, but for God as well. Whatever we decide upon will have an effect on our spiritual journey as Christians,” he said.

Among other qualifications, Palma said the country’s next leaders should be “pro-life and God-fearing.”

“If a candidate doesn’t fear God, who will he or she be afraid of? Let us choose leaders who are pro-life, those who respect and value marriage and family, and candidates who have faith in God,” he said.

Palma said voters must check the lifestyle of their candidates and should avoid electing leaders who just enrich themselves instead of prioritizing the needs of the people, especially the poor.

“Let us pray that the nation we love be preserved from the bad implications of our choices,” he said.

According to Palma, it is equally important to know the candidates by the company they keep, or specifically, who are their supporters.

“Who finances your campaign?” is a question that every voter must ask of the candidates, the prelate said.

The accomplishment of the candidate must also be measured according to what he has done in the past years prior to this election, either as a private person or one who has been in an elective office.

The choice, he said, should also be a person who has a good reputation and has shown care for the environment.

Palma lamented how candidates destroyed each other, even to the point of using violence just to ensure victory.

“I’m saddened by stories of killings which may have something to do with the elections. Let us not go down to that level. Candidates can win even without using violence,” he said.

Palma entrusted the conduct of the elections to the intercession of the Blessed Virgin Mary and St. Pedro Calungsod.

“The Philippines has been considered ‘Pueblo Amante de Maria’ (A people in love with Mary). Let us pray to our Blessed Mother,” he said.

“Let us also pray to San Pedro Calungsod who sacrificed his life for our faith. Let us remember that people all over the world have high regard for our country because of the faith and values we uphold,” he added.

Present during yesterday’s activity were Auxiliary Bishop Emeritus of Cebu Antonio Rañola, and some priests, including Fr. Carmelo Diola of the Dilaab Foundation Inc., a Church-based organization in Cebu which promotes good governance and genuine leadership.

Dilaab Foundation presented the LASER Test, a five-point guide developed in 2007 by the Christian-based movement to help voters and candidates make choices based on values and realistic criteria.

These guide questions are:

“Does the candidate have a modest lifestyle?”;

“Does he or she have a track record of competence and servant leadership?;

“Who are the persons supporting his candidacy?”;

“Is he or she engaged in vote-buying?”; and “What is his moral background?”

In a statement, Diola advised the electorate to avoid “shortcuts” in an attempt to attain development and achieved something good.

He likened the elections to the story of Adam and Eve who were tempted by the devil in the Garden of Eden.

“When Adam and Eve chose to eat the forbidden fruit, they did so thinking that the fruit and their action were good. Nobody chooses evil for the sake of evil. We choose evil always under the guise of good,” Diola said.

“Candidates at the local and national levels present themselves as good for the public. How do we discern the real thing? Shortcuts often hinder our discernment of the true good,” he added.

One glaring example of shortcuts, he said, is vote buying which takes advantage of the poverty of majority of voters.

“Doesn’t this take advantage of our ‘utang-na-loob’ mentality that distorts our capacity to judge correctly?” Diola said.

This early, however, rampant vote buying have already been reported in some parts of the province, such as in the town of Dumanjug (please see story on page 4).

Reliance on surveys, the priest said, also prevents voters from going through the process of making up their minds based on their search for truth.

Diola said many candidates for national positions portrayed themselves as “political messiahs” who would solve our problems for the people, whether it be in terms of embodying academic brilliance or executive success, identifying with those who are or feel excluded from the benefits of development, or continuing a legacy.

“Isn’t the bottom line discernment issue for voters a choice between continuity or rupture? Which option will bring about our true good as a nation?

As someone puts it: to insist on continuity would be futile and stupid but to assign that change to a presidential candidate whose very life and methods are in need of change would be indiscriminate and fanatical,” he said.

Diola said it would be the individual conscience that would have the last say and this should be respected and protected.

“We all need conversion. We need to form our consciences and not choose out of fear or desolation,” he said.

Meanwhile, the Cebu-Citizens Involvement for People’s Empowerment and Liberation (C-Cimpel) is now ready to help monitor and ensure a clean, honest, and peaceful elections in Cebu.

Marilu Chiongbian, C-Cimpel executive director, said they have gathered around 8,000 to 10,000 volunteers from Cebu’s 150 parishes. The volunteers will be deployed in the different voting precincts during the May 9 elections.

C-Cimpel, an accredited citizen’s arm of the Commission on Elections (Comelec) through the Parish Pastoral Council for Responsible Voting (PPCRV), will also monitor the election turnout and compile updates.

C-Cimpel started out as a poll watchdog in 1992 to safeguard the votes during the elections that year.

Organized as a lay initiative of the Archdiocese of Cebu, C-Cimpel helps fulfill the Catholic Church’s view of the electoral process as a sacred duty of every citizen since it affects the lives of many, said Msgr. Joseph Tan, the spokesperson of C-Cimpel in a press release.