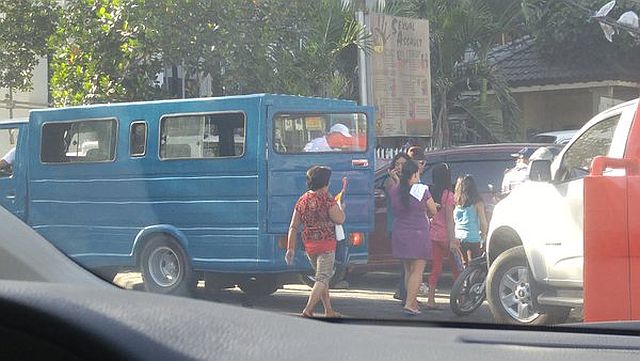 A BLUE van was spotted transporting a group of at least 15 voters to the Guadalupe Elementary School on Monday morning.

The voters, who were seen holding paper fans, sample ballots and leaflets with the names of the Bando Osmeña-Pundok Kauswagan (BO-PK) candidates printed on it when they got off the vehicle, refused to be interviewed.

Cebu City north district election officer Edwin Cadungog said transporting ‘hakot’ voters to polling centers is highly discouraged and is considered an election offense. “But this is a matter of evidence which has to be proven,” he added.

BO-PK leader and mayoral candidate Tomas Osmeña denied that they dispatched a van to bring voters to the Guadalupe Elementary School. He told Cebu Daily News that he was still at home “catching up on sleep.”

“It must have been a big van to fit so many,” he said in his message. Osmeña said as a policy, he doesn’t tell voters what to ride in on their way to their designated polling centers.