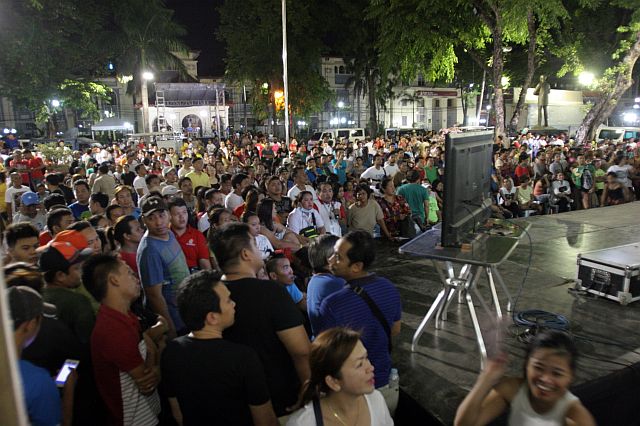 WHO WILL WIN? Supporters of different local and national political parties monitor the canvassing of votes at the Cebu City Hall via a wide screen TV set put up in front of the City Hall building. Mayor Michael Rama (inset) tells his supporters he is not giving up the race with Tomas Osmeña leading in the count. (CDN PHOTO/JUNJIE MENDOZA)

The incumbent mayors of Cebu and Talisay City were getting trounced by their challengers who were pulling away ahead of their opponents, as the official counts of the Commission on Elections (Comelec) breached the 90 percent mark last night.

Tomas Osmeña was ahead in the Cebu City mayoral race, leaving by a wide margin incumbent Mayor Michael Rama in a hotly contested return bout between the two erstwhile political allies.

But Rama was refusing to concede, insisting he still has enough votes to overtake Osmeña’s lead.

Rama, who spoke before a crowd of supporters gathered outside the Cebu City Hall after he left the canvassing area shortly before 11 p.m., said: “Daghan man kay ta! Ngano pildi man ta!” (There are so many of us! Why should we lose!)
But the Bando Osmeña-Pundok Kauswagan (BO-PK) camp appeared to be poised to claim victory over the mayoral seat, even if Osmeña’s running mate, Councilor Nestor Archival Sr., was trailing behind reelectionist Vice Mayor Edgar Labella, who had 220,764, against Archival’s 195,647 votes.

“To God be the glory,” was the reaction of re-electionist councilor Margot Osmeña, the wife of Tomas Osmeña.

Margot said in a text message to Cebu Daily News that she was grateful to the Cebuanos for their continued trust on her and her husband.

“To the people of Cebu City, thank you,” said her text message.

But this early, Margot said, she would not want to think of how the entry of more Team Rama Councilors would change the Council’s political landscape.

The City Council has a total of 16 elected councilors and an ex-officio member, Association of Barangay Councils (ABC) president Philip Zafra.

Official Comelec tally released as of 10 p.m. yesterday showed that only BO-PK Councilors Osmeña and Eugenio Gabuya Jr. were winning in the city’s south district.

In the north district, only Councilors Alvin Arcilla, Mary Ann Delos Santos, Sisinio Andales, and Joy Augustus Young made it to the top eight.

It was also starting to look like a debacle for the incumbent in Talisay City, with Mayor Johnny de los Reyes trailing by nearly 30,000 votes behind a veteran political hand, Eduardo Gullas.

For the Cebu City congressional race, the official tally, with 94.62 percent of the votes counted as of 11:21 p.m., showed that north district reelectionist Rep. Raul del Mar (BO-PK) was pulling away with 129,382 votes, or more than twice the 60,969 votes garnered by former Cebu City mayor Alvin Garcia (Team Rama).

But in Lapu-Lapu City, reelectionist Mayor Paz Radaza (LP) was pulling away with 77,619 votes against her nearest challenger, Rolando Patalinjug (PDP-Laban).

The gubernatorial race, sources in the camp of Cebu Gov. Hilario Davide III (LP) were already claiming victory even if the official canvassing of votes has yet to start.

The Provincial Board of Canvassers (PBC) convened at the Capitol Social Hall at 3 p.m. yesterday but there were no results beamed on the two projector screens, where a list of cities and towns in Cebu appeared.

The PBC decided to begin the official canvass of votes at 9 a.m. today.