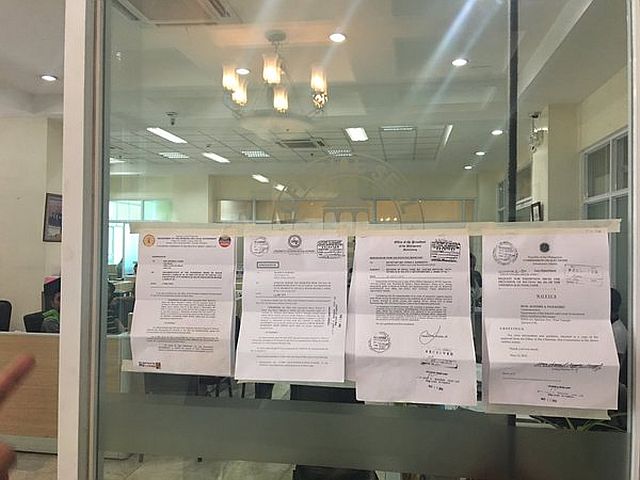 The mayor’s staff refused to officially receive the copy of the order which prompted the regional DILG-7 officials to just post the order on the glass door leading to the mayor’s office at 10:30 am. (CDN PHOTO/JOSE SANTINO S. BUNACHITA)

A day after conceding to Cebu City Mayor-elect Tomas Osmeña, outgoing Mayor Michael Rama and his allies in the City Council began receiving the suspension order issued against them by the Department of Interior and Local Government (DILG) 7.

But instead of six months, the suspension will last until June 30 since the decision from the Office of the President states that the suspension should not exceed the unexpired terms of the officials.

The mayor’s staff refused to officially receive the copy of the order which prompted the regional DILG-7 officials to just post the order on the glass door leading to the mayor’s office at 10:30 am.

Aside from Rama, the suspension order was also posted to the offices of Vice Mayor Edgardo Labella and the 12 city councilors impleaded in the P20,000 calamity aid case filed by lawyer Reymelio Delute.

“In this regard, you are hereby directed to comply with this ORDER OF SUSPENSION by temporarily vacating your office, and consequently cease the performance of powers and functions appurtenant thereto, IMMEDIATELY upon receipt hereof,” read the DILG 7 memorandum to the officials.

Aside from the memorandum, the regional DILG 7 also handed to the officials a copy of the May 16 DILG central office memorandum to DILG 7 regional director Rene Burdeos; the April 6 decision from the Office of the President ; and the May 10 Notice from the Commission on Elections (Comelec) to DILG Usec Austere Panadero approving their request to exempt the suspension order from the election ban.

Regional DILG-7 Director Rene Burdeos and DILG City Director Danilo Almendras went to the offices of each of the 12 city councilors to post the orders. The documents were received by their office staff.

Only Councilor Sisinio Andales personally received the order from DILG in his office. He said he’s happy and willing to comply with it.

“I have no problem with this. At least I can have a vacation with my family and also focus on the cases I’m handling,” said Andales who is also a practicing lawyer.

DILG 7 Legal Officer Aiiza Fiel Nogra that “by operation of law,” Councilor Margot Osmeña, who isn’t among those suspended, should already assume as acting mayor immediately.

Nogra also explained that even if there were only four councilors, including acting Vice Mayor James Anthony Cuenco, they can still hold sessions since they can constitute a quorum.

She said though that they have yet to give an official memo to Osmeña to assume as acting mayor.

Other councilors who were not suspended were Lea Japson, Richard Osmeña and Philip Zafra. Councilor Osmeña already took oath before Asst. Prosecutor Matet Calibugan-Casiño at the City Prosecutor’s Office.

In a press conference at her office later, Osmeña assured there will he continuity of basic services in the city, “maybe even better” during her temporary stint as the first woman mayor of the city.

She also signed her first four memos as acting mayor to department heads and employees as well as barangay officials. Osmeña said she also plans to give a picture of the financial status of the city while in office.

“We will show the true financial condition of the city. I think we have to know where we are starting from. As of the last daily cash balance report, we have P8.4 billion in the bank. It means the only money we received is from the sale of the SRP,” she said.