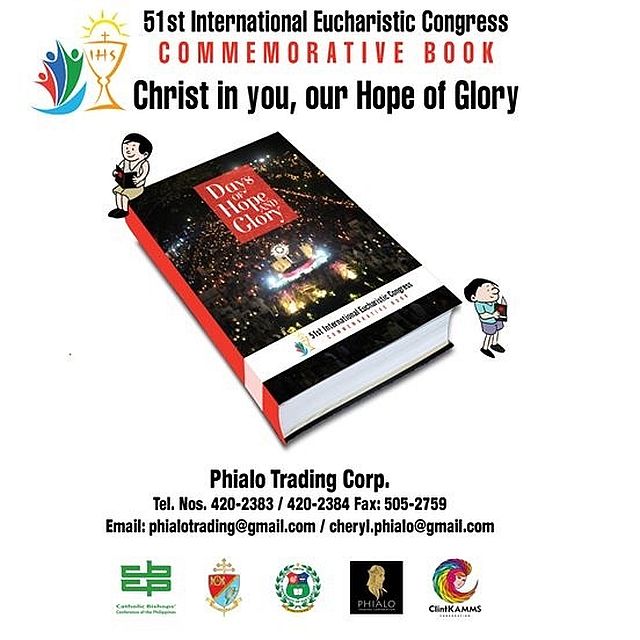 TO relive the moments of the 51st International Eucharistic Congress (IEC), the Archdiocese of Cebu will launch tomorrow a commemorative book on the historic event held in Cebu City last January 24 to 31.

The 284-page coffee-table book entitled “Days of Hope and Glory” calls to mind the momentous events of the congress that drew about 15,000 delegates from 75 countries.

It took the documentation committee led by Fr. Joseph de Aquino nearly four months to compile feature stories and photographs about the week-long event into a book.

The commemorative book will be launched tomorrow at 7:30 p.m. at the IEC Pavilion inside the San Carlos Seminary in Mabolo, Cebu City.

The book, which goes with a DVD containing all the speeches and talks of the IEC sessions and events, is sold at P2,000. After the launching, the price of the book will increase to P2,250.

“The sections of the book will bring you back to the congress. This is our legacy to Cebu for the most successful IEC ever held in the country and in the world. We hope to remember this event forever,” said Dr. Jobers Bersales, the editor of the commemorative book, in a press conference at the Archbishop’s Residence yesterday.

The book’s chronological summary was written by Cebuano Jesuit priest Jose Quilongquilong, now the president of the Loyola School of Theology (LST), while the other articles were written by different authors.

Cebu Archbishop Jose Palma said they received positive feedbacks from various delegates on the manner Cebu hosted the 51st IEC. Some, the prelate said, considered the IEC “the best” among all the Eucharistic congresses.

Cebu Auxiliary Bishop Dennis Villarojo, the 51st IEC secretary-general, said they spent P130 million of the P150 million budget raised by the Church for the event.

He said they will release a full accounting of all the donations and expenses once all the dues are paid.

“The low cost of the 51st IEC, compared to other Eucharistic congresses, is one of the aspects that impressed Rome,” Villarojo said. He said the IEC wasn’t just an event to behold but an experience that brings about grace.

“The spiritual effects are not apparent right away but what we can tell is that more than just the effect is this realization that this Eucharistic spirituality and culture is existing among us. What we need to do is to deepen, strengthen and sustain it,” he added.

Asked how the IEC will help the Philippines and its new set of leaders, Villarojo said everybody should work for the common good.

In an interview after the press conference, Archbishop Palma said Catholic Church leaders have decided to handle criticisms thrown by presumptive president Rodrigo Duterte against them in the right way.

“I think it’s good to have very little talk now. It’s a wait-and-see scenario so to speak. President Duterte is difficult to assess. He says this and that. We might as well wait when he sits in office,” he said.

Read Next
EAGER FOR VENGEANCE