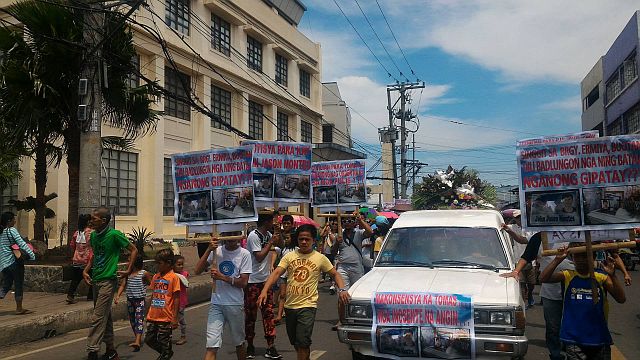 ABOUT 100 people were on hand to pay their respects to John Jason Montes who was finally laid to rest at the Calamba Public Cemetery Tuesday afternoon.

Before attending the Requiem Mass at the parish church, the funeral procession passed by City Hall.

They carried streamers that read “Makonsensya ka Tomas, mga inosente ang naangin (We hope Tomas gets bothered by his consceince for including an innocent person), among others.

During the Requiem Mass at the Archdiocesan Shrine of San Nicolas de Tolentino in Barangay San Nicolas, Fr. Alex Apigo advised Montes’ parents and relatives to seek God’s mercy instead of seeking revenge.

“Our consolation is God’s mercy. May we be able to experience it,” he said in his homily. Montes’ parents Victor and Susana sobbed as the priest smoked with incense the coffin of the teenager.

His father, Victor, reiterated their plea for justice. Victor said he would have wanted a quiet and simple funeral procession for his son.

But he said their relatives and neighbors wanted to bring placards to protest the incoming Cebu City mayor’s support to policemen who killed his son.

Victor said he doesn’t oppose Osmeña move to give financial aid to any Cebu City policeman who can kill drug lords and other criminals. “Tomas’ action is okay. But the police should get the right targets,” he said.

Victor and his wife sells food in an eatery in Ermita, Cebu City. They have six children. Montes, their fifth child, loved playing basketball.

The boy’s elder brother said Montes was accepted as a varsity player of the University of San Jose Recoletos’ junior team but did not pass the entrance exam.

Montes had to study first year high school at the Regino Mercado School in Cebu City. But he decided to stop going to school four years ago.

On his coffin, Montes wore the white jersey of the Oklahoma City Thunder, his favorite team in the National Basketball Association (NBA).