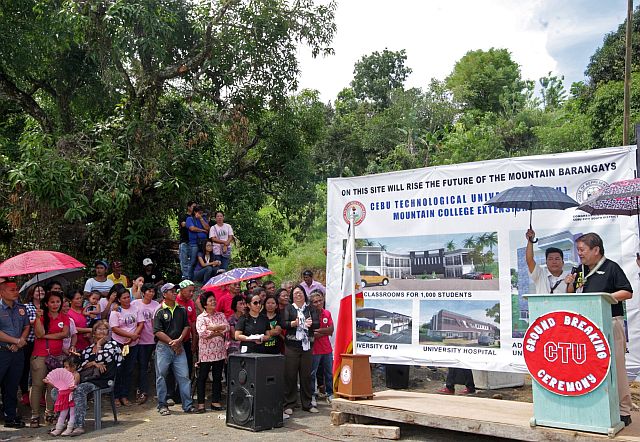 Cebu City Mayor-elect Tomas Osmeña delivers his message to those who attended the groundbreaking ceremony of the CTU Babag Campus in the mountain barangay of Babag. (CDN PHOTO/TONEE DESPOJO)

Free education for all.”

Osmeña’s promise means that most students in the college will be scholars of the Cebu City government, said Rep. Rodrigo Abellanosa of the Cebu City South District, who was one of the city officials present during the groundbreaking activity.

Abellanosa said the new campus could augment the tertiary education needs of the youth in Cebu City’s mountain barangays.

“We will change the landscape, figuratively and literally, of the mountain barangays,” said Abellanosa.

He said the construction of the campus will be done in six months and will be ready for students’ occupancy in this academic year’s second semester.

The two-story school building will be constructed on a one-hectare lot donated by the Tourism Infrastructure and Enterprise Zone Authority (Tieza).

At present, students enrolled at the CTU Campus, are temporarily attending classes in a Barangay Bonbon Gym. They will, however, transfer to the new school building, once its construction will be completed.

The new school building, when completed, will have 20 classrooms, which can accommodate at least 1,000 students, said Abellanosa.

He also said that the campus can be a great opportunity for the people to learn.

He was referring to the recent controversy of the temporary CTU Extension Campus in Barangay Bonbon which was opposed by outgoing Mayor Michael Rama.

Abellanosa also reassured the residents that what happened last year will not happen again.

Dr. Edgar U. Tibay, CTU vice president for production, extension and business affairs, also said that he is happy because the political chaos is already over.

“The delivery of quality and accessible education is right in their hands,” said Tibay.

Also yesterday, Joy Maternal, the daughter of the late pastor Jun Maternal, showed her gratitude to Abellanosa and Cebu City acting Mayor Margarita Osmeña for their efforts to ensure the building of the campus.

Acting Mayor Osmeña said a building in the campus will be named after the pastor in recognition of his bravery.

Joy Maternal said the mayor had helped in their financial and academic needs as she is one of the scholars of the city.