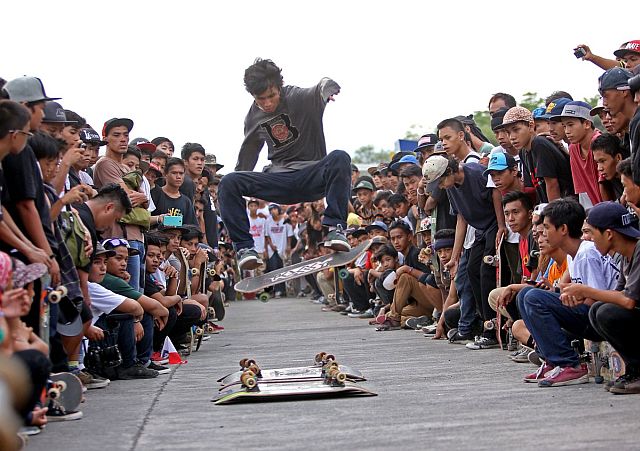 A skateboarder shows off his skills by leaping over 10 skateboards during yesterday’s Go Skateboarding Day at the SM City Cebu open parking lot. (CDN PHOTO/LITO TECSON)

More than a thousand skaters took part in the annual celebration that originated in the United States. They started with a parade from Fuente Osmeña all the way to SM City Cebu, where skating ramps and rails were set up for the participants. A program and several other activities and competitions was also prepared for the whole-day affair.

DC Shoes Philippines Brand Manager Vianca Tan was surprised to see the number of skaters who joined the event. She said Cebu has a big and united skateboarding community compared to other major cities in the country.

“We’ve done events like this in Baguio and Manila but I’ve never seen anything like this,” she said. “We, at DC Shoes, are very flattered that Cebuanos really love skateboarding.”

Because of the huge turnout, Tan said they are planning to organize more activities such as skateboard competitions to be spearheaded by DC Shoes Philippines in the future.

She also added that DC Shoes coordinates with local skateboarding groups to scout for potential talents that the brand can sponsor.
Campaign for skate park

Meanwhile, the first Philippine Skateboarding League that was organized by the Philippine Extreme Sports Scoring System (PXSSS) was held also yesterday as part of the event. The tournament was ongoing as of this writing.

The event also launched a signature campaign yesterday to push for the construction of a public skatepark in Cebu City.

Cebu currently has two skateparks: one in Talisay, which is privately owned and one in Lapu-Lapu City, which was constructed by the local government.