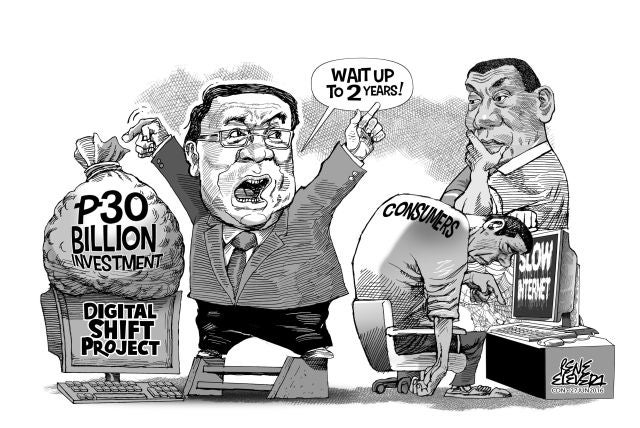 PLDT chairman Manny Pangilinan’s call (appeal) for the national government “not to meddle too much” in relation to its digital shift project which includes a joint deal with Globe Telecom to buy San Miguel’s Vega Telecom should be weighed in relation to the Philippine Competition Commission’s (PCC) position to review the deal “for national interest and public policy.”

The tycoon’s argument against interference from the incoming Duterte administration is a familiar position adopted by Big Business who are already hurting from bureaucratic red tape, taxes and the dismal existing infrastructure in the country.

Pangilinan said PLDT is pouring in P30 billion into improving their facilities and services and a comprehensive review of the joint PLDT-Globe deal will only delay the completion of their project whose target date is two years from now.

While the amount and details of the investment are impressive, the obvious bottom-line question to be asked by the public is, how much will we have to pay for it? At an investment of P30 billion and with its acquisition in tandem with Globe of Vega Telecom’s 700 megahertz frequency, Filipino consumers expect nothing less than dramatic, improved results of its Internet download and upload speeds but they also know and suspect that these improvements won’t come cheap.

That’s where the PCC comes in. When San Miguel dropped its bid to become an alternative telecom provider in a joint venture with a foreign partner, it cited among other factors the protracted legal dispute with PLDT which owns Smart and Globe Telecom that also discouraged foreign investors from pitching in.

The PCC review was intended to ensure that the existing duopoly that is PLDT-Globe won’t discourage or set roadblocks to the entry of a third, a fourth or even as many companies interested to offer themselves as alternative Internet service providers.

The PLDT-Globe joint deal has ramifications not only on business process outsourcing (BPO) companies located in Cebu and other prime BPO destinations in the country but also the average Filipino households who can afford smartphones and other mobile devices which they use to contact family, friends and contacts either here in the country or abroad through video calls, texts and e-mails among others.

Public demand, access and acquisition of smartphones and other mobile devices are expected to rise dramatically every year onwards and with it the profit to be generated by internet connectivity services. It is the PCC’s job and mandate to make sure that these services will not only improve but will continue to be within reach of the average Filipino consumer.

Pangilinan can complain all he wants about the PCC review but it is imperative for public interest that the joint deal be thoroughly reviewed not only to ensure compliance with existing laws but that it ultimately will be beneficial to the public.

Read Next
June or when it rains…