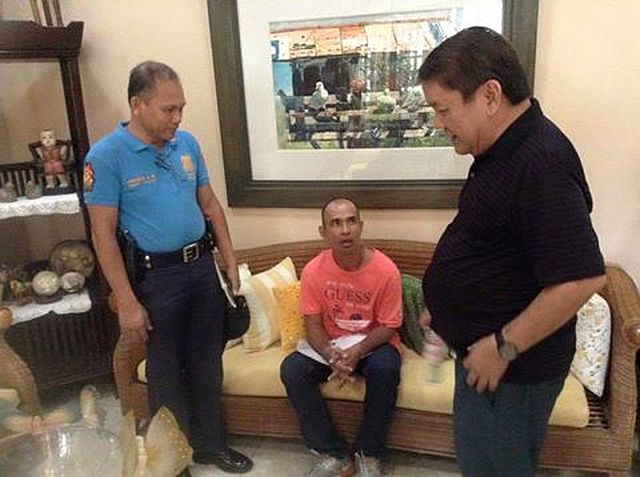 Cebu City Mayor-elect Tomas Osmeña (right) says Quirico Mangyao Jr. (center), who admitted to selling drugs when he visited the Mayor in his house yesterday, promised Osmeña that he would stop his illegal trade. At the left is Senior Insp. Genilo Veraque, Parian Police chief. (TOMAS OSMENA’S POST ON HIS FACEBOOK ACCOUNT)

FEARING that he might be the next casualty in the city’s intensified war against drug lords and drug dealers, a resident of Barangay Lorega San Miguel, who admitted to selling drugs, promised to stop his illegal activities.

“He wanted to stop because of his fear of Mayor Tommy (Osmeña) and President-elect Rodrigo Duterte (in their campaign against illegal drugs and crime),” Veraque told Cebu Daily News.

As seen in the photo, Mangyao was wearing a pink shirt and sitting on a couch while staring at Osmeña.

CDN sent a text message to Osmeña for a comment, but there was no reply from his end.

Veraque said Mangyao couldn’t be arrested because there was no pending warrant of arrest against him.

His case involving illegal drugs was dismissed in 2011 at Regional Trial Court (RTC) Branch 15. The case was filed by the National Bureau of Investigation (NBI).

A similar case was filed against him the following year, but he was acquitted last Feb. 29, 2016.

“We will continue to observe and monitor him,” Veraque told CDN.

Veraque said that they were asked to submit the top 10 suspected drug peddlers under their jurisdiction.

“When we received the information about these suspected drug peddlers, we went to their houses and talked to them,” he added.

Veraque said Mangyao must have been scared when he found out that we visited him last week, and he was not around then.

CDN also went to the house of Mangyao yesterday afternoon. His wife, who refused to be named, did not grant an interview.

“What we told Mayor Osmeña is enough. For now, we just want to be silent. We don’t want to be misinterpreted by our neighbors and the public,” the wife told CDN.

During President-elect Rodrigo Duterte’s speech at last Saturday’s thanksgiving-cum-party at the South Road Properties, Duterte said he would kill those who sell drugs if they would not heed his request for them to stop their illegal activities. (See related story on page 1)

He has also offered a P5-million bounty for drug lords in earlier reports.

Cebu City Mayor-elect Tomas Osmena has also offered P50,000 for each criminal that a police officer can kill.

Read Next
Fire displaces 182 in Lorega