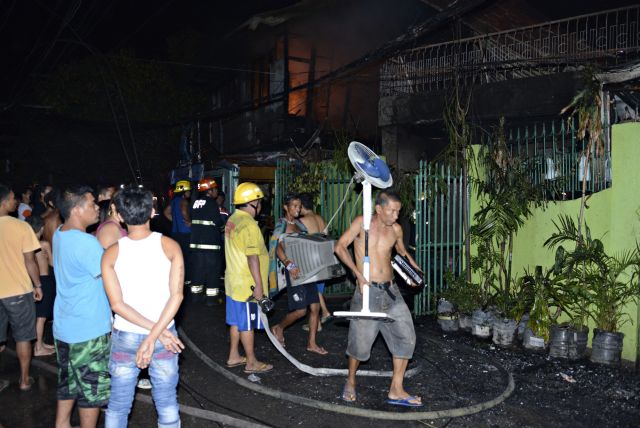 Fire victims try to carry whatever belongings they can bring out of what remained of their homes as firefighters put out the blaze that hit Lorega San Miguel. (CDN PHOTO/CHRISTIAN MANINGO)

Lourdes Veloso awoke to the screams of her neighbors and the smell of something burning inside her home in the interior portion of Upper Lomar, Barangay Lorega San Miguel in Cebu City yesterday dawn.

She said she heard some sparks and then an explosion caused by an electric post.

“We ran for our lives,” a teary-eyed Veloso told

No one was hurt, though 42 families consisting of 182 persons were displaced by the fire.

Damages were initially pegged at P400,000 since the houses were made of light materials.

Veloso, a 57-year-old fruit vendor, said her family was unable to save anything from her rented apartment.

“We were very afraid that the other electricity post would also explode,” she said.

Veloso was with her two children, sister-in-law and her three-year-old grandson when the fire incident happened.

“I have no idea where to go (stay) after the fire,” she said.

As of the moment, her family is staying in the barangay gymnasium together with other fire victims.

Veloso is a native of Pinamungajan, midwest Cebu who moved to Cebu City since she sells fruits in Barangay Lorega San Miguel.

Veloso, who showed to Cebu Daily News a rainbow colored shirt given to her by one of her neighbors, asked for food, water and clothes.

Another fire victim who refused to be named said he was supposed to join a fun run but was forced to wake up early when he heard his neighbors shouting that there was fire outside.

He went out with his four children and one grandchild.

He said he was unable to save his belongings, and he has nowhere to go.

He said he will install light bulbs in the area to prevent strangers from coming in and stealing roof sheets from them.

After some assessments, they will receive some housing materials.

“They still have to be assessed. What’s being given now is emergency assistance. They will be given building materials,” she said in a phone interview yesterday.

The acting mayor said the city government will still have to check the fire site, especially the ownership of the lot to determine if the area will be reblocked by City Hall or not.

He cited as an example the fire last week in Barangay Apas which is not owned by the city.

“In Apas, we cannot re-block. We don’t own that. That’s owned by the province. (In Lorega) I have to check,” she said.

Japson said some of the fire victims are now staying at the barangay’s sports complex.

“There’s only a few of them there because the others have decided to stay with relatives,”
she said.

Read Next
Simple food, only Leni as VIP guest in Tom, BO-PK oathtaking