‘NO SEGREGATION, NO COLLECTION’ 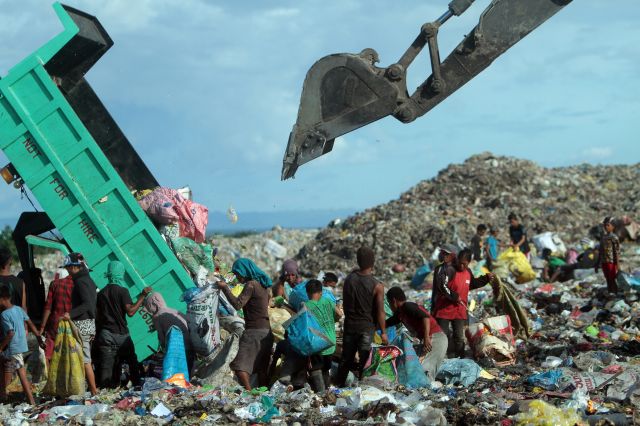 A notice to Cebu City residents: if you do not segregate your garbage, it will not be collected.

Cebu City Acting Mayor Margot Osmeña made the strict enforcement of the city’s existing “no segregation, no collection” policy as one of her last acts, as she turns over today the city’s helm to her husband, Mayor Tomas Osmeña.

Osmeña’s order came on June 28, the same day that the city government reopened its Inayawan Sanitary Landfill as a short-term solution while it finds ways to properly manage its garbage.

On that first day alone, at least 800 tons of unsegregated wastes were dumped in the 15-hectare Inayawan landfill site.

The landfill was supposed to be operated only for seven years, or to be closed by 2005, but it remained in operation for 17 years. It was closed in January last year, but it was reopened last Tuesday amid a dispute over the multi-million-peso dumping fees at the privately owned landfill in Consolacion town.

Osmeña, in her June 28 memorandum to the Department of Public Services (DPS), said the strict implementation of the “no segregation, no collection” policy formed part of the city’s new solid waste management system.

DPS head John Paul Gelasque, however, said they would begin to enforce the “no segregation, no collection” this coming Monday, July 4. But he said it might take time before residents would get into the habit of segregating their wastes.

Galasque said he would be sending environmental officers to the barangays this week to disseminate information on the need to segregate.

Osmeña’s memorandum classified the city’s garbage as biodegradable, recyclable, residual, special waste and plastics — all of which have to be stored or disposed of separately.

Biodegradable garbage, such as food and kitchen wastes, are scheduled for collection on Mondays, Wednesdays and Fridays.

Recyclable wastes, such as paper and glass bottles, will be collected on Tuesdays, Thursdays and Sundays.

But Kalubihan Barangay Captain Carmilo Milan said it would take time before all of his 15,000 residents would be able to fully comply with the city’s policy.

Milan said they have no problem with commercial establishments, which have long been segregating their garbage, but households have continued to refuse separating their wastes.

Barangay Kalubihan, located in downtown Cebu City, has a voting population of only 1,600, but its residents would reach to as much as 15,000 at night. Most of its residents are students and workers who occupy lodging houses and patronize sidewalk vendors, commercial establishments and fast food chains that all produce tons of garbage daily.

Kalubihan, that includes the area surrounding the University of San Jose-Recoletos (USJ-R), the block occupied by Asian College of Technology along N. Bacalso Street up to Junquera area in downtown Cebu City, produces at least eight tons of garbage daily, he said.

Compounding the problem is that the village does not own a garbage truck and so it has to rely on the two trucks from DPS that collect the barangay’s garbage from nightfall to dawn, Milan said.

Galasque said DPS has 34 trucks and about 200 garbage collectors who would aid the barangays in their garbage disposal needs.

The city’s segregation policy was first implemented in 2014 on the order of then mayor Michael Rama who, on Jan. 15, 2015, ordered the Inayawan landfill closed.

Rama said the landfill closure was preparatory to a long-term goal of rehabilitating and converting the landfill into a sustainable ecozone for economic development.

Since the landfill’s closure, however, City Hall has been paying P700 per ton of garbage disposed in a private facility owned by the Asian Energy Systems Development in Barangay Polog, Consolacion.

The city government spends P20 million a month for the tipping fees alone. As of this month, however, the city is yet to pay P32 million for its garbage disposal from January to May 2016.

City councilors allied with Bando Osmeña-Pundok Kauswagan (BO-PK) ha long questioned the huge sums that the city spent on tipping fees but their protests were ignored.

With the reopening of the Inayawan landfill site, outgoing City Councilor Nida Cabrera, who chaired the city council’s environment committee, said City Hall tapped the help of Mansei Recycling Plant, a Japanese company, which has set up a recycling machine in one section of the landfill area.

Cabrera said the landfill would only be used for two years, just to give the city government enough time to find other means to manage its garbage.

Cabrera, along with the City Environmental and Natural Resources Office (Cenro), was tasked to handle the information drive for waste segregation, according to Gelasque.

Yesterday, some drivers of barangay-owned garbage trucks were still unaware of the city’s new policy and traveled the at least 10-kilometer distance to the Consolacion landfill to dispose their waste. They were refused entry and were told to dump their waste in Inayawan.

With 800 tons of wastes dumped in Inawayan in barely 24 hours, about 50 scavengers appeared at the landfill, leaving only after they had filled their sacks with plastics and other recyclable materials that they would sell at the nearest junk shop.

Scavenger Rodito Daogdaog, 36, said he now could hope to feed his seven children solid meals with rice, instead of just porridge.

Daogdaog was among those who maintained their shanty at the landfill site even after it was closed down last year.

The garbage dumped in Inawayan since Tuesday were mostly plastic materials and other non-biodegradable wastes, said another scavenger, Dennis Constantino. /with USJ-R Intern Dafbe Wenceslao

Read Next
Tickets, fine for violators seen on cam