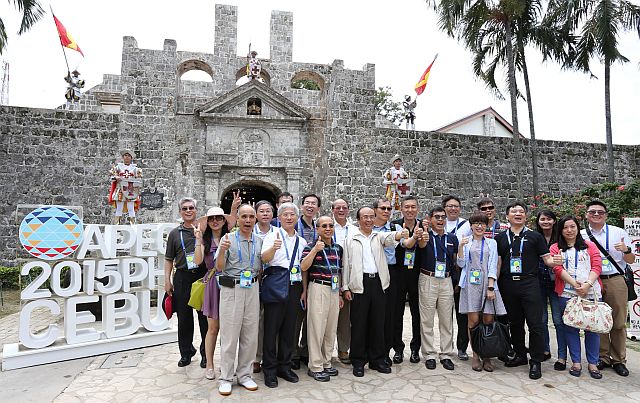 The Asia-Pacific Economic Cooperation (APEC) Summit held in Cebu last year has helped promote the region as one of the places in the country capable of hosting international conferences. (CDN FILE PHOTO)

The influx of investments for tourism development and improvement of tourism infrastructure in the region are among the factors that will boost the chances of Central Visayas to hit its target of 5.8 million arrivals in 2016.

Director Rowena Montecillo of the Department of Tourism in Central Visayas said these two driving forces have fueled her optimism to hit its target especially since as of February this year, Central Visayas has already reached 15 percent of its target for the year with around 870,000 foreign and domestic arrivals.

“We are hoping that even with the new administration, we will be able to continue all the projects we’ve started in the past years,” she said in an interview during the launching of Manufacturing Technology Cebu, PackPrintPlas Cebu 2016, and Cebu International Travel Expo 2016 on Thursday.
Central Visayas saw an average annual tourism growth rate of 14 percent from 2010 to 2015.

The DOT-7 also surpassed its 4.4-million target for 2015 with 4.6-million arrivals last year, double the figures in 2010 at the start of the administration of former president Benigno Aquino III.

“These figures simply mean that there are pouring initiatives and influx of investments coming from both public and private sectors to advance tourism in the region,” said Montecillo.

She added that the increasing tourism demand in Central Visayas can also be attributed to the hosting of international conferences and events such as several APEC Summit 2015 meetings and Japan Travel Agency Family Relations Tour in Cebu last year.

Montecillo also emphasized the important role of infrastructure improvements in the growth of tourism.

Through its tourism infrastructure program, the DOT-7 is working with the Department of Public Works and Highways (DPWH) in the region to facilitate better access to and from priority tourism sites, she added.

She said that for this year, they have endorsed 14 road projects in Cebu alone and 28 others in strategic locations in the rest of Central Visayas amounting to more than P1.8 billion.

In 2015, the World Economic Forum’s latest travel and tourism competitiveness index ranked the Philippines 74th among 141 economies, 20 places higher than in 2011.

“We are even higher than Jamaica and Egypt which are also sought-after destinations. With your support, there is no doubt we will be able to perform better and reach new heights,” said Montecillo.

President Rodrigo Duterte earlier appointed Wanda Teo as the new tourism secretary, who vowed to continue the “It’s More Fun in the Philippines” campaign to market the country as a travel destination.

Montecillo said she is expecting some changes under the new administration, but added she hopes they will be able to reap the results of their labor in the last six years.

The director said they will strive to further promote Central Visayas as a destination and bring in more people to visit.

Events like the Cebu International Travel Expo (CITE), she added, provide bigger opportunities for tourism development and complement what the DOT-7 has been doing.

Last year, Montecillo said the CITE attracted 7,768 travel enthusiasts and travel providers from all over the country.

The CITE coincides with Manufacturing Technology Cebu and PackPrintPlas Cebu 2016, two of the biggest industrial expos in the region, all of which will run from June 30 to July 2.

Stakeholders from the manufacturing and industrial sectors gathered in the 200-exhibitor expo showcasing the latest technologies and innovations in packaging, printing, plastics, food technology and industrial automation.

Cebu Chamber of Commerce and Industry (CCCI) president Melanie Ng, in a speech, said the event will help manufacturing industry players keep up with the challenge of increasing competition with other emerging economies.

“Our businesses should be properly equipped. We are optimistic that through this event, we will be able to create a positive impact as we learn about innovations and technologies in the industry,” she said.

Cebu’s manufacturing industry makes up close to 25 percent of the total production in the region.

From a national perspective, Central Visayas has contributed 0.7 percentage points to the 8.3 percent growth of gross value-added in manufacturing in 2014.