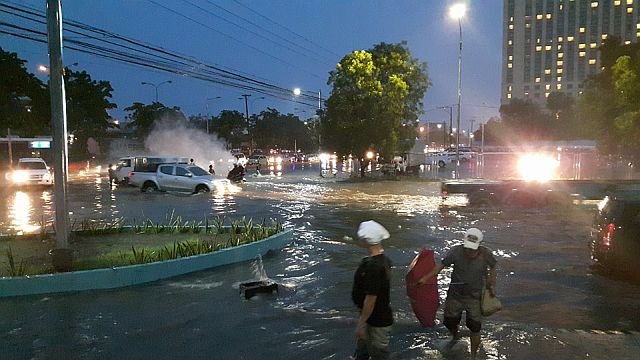 The Armed Forces Central Command based here deployed their rescue personnel to help a family who was left stranded inside their flooded home on 5th Street in Sitio San Miguel in Barangay Apas.

Nagiel Bañacia, head of the city’s disaster office, said the water level in major parts of the city started to rise during heavy rains that started past 4 p.m.

He said that zero visibility was reported in parts of the city because of the heavy rains that was accompanied by lightning and thunderstorm.

Water level in city streets was reached two feet deep. Floods in interior portions of some villages were worst.

Because of the floods, Bañacia said traffic was heavy in major city thoroughfares –some areas were even in a standstill.

Bañacia advised Cebuanos to stay indoors while waiting for the floodwater to subside.

Hundreds of commuters were stranded on the city’s downtown area where most of the colleges and universities and stores were located.

Oscar Tabada of the weather bureau based in Lapu-Lapu City, Cebu, said the heavy rains were caused by Intertropical Convergence Zone (ITZC) and were expected to last until Friday night.

Bañacia said the city was placed under blue alert status when it started to rain past 4 p.m., which meant that all disaster personnel were on standby to response to any emergency.

Disaster personnel equip with ropes and life vests had been deployed in Sitio Magtalisay located at the back of the old Pepsi warehouse in Barangay Mabolo.

Water level would rise to up to waist level in this lowlying area located close to the Mahiga Creek, which separates Cebu City from nearby Mandaue City.

Bañacia said they also deployed six city-owned buses to ferry stranded passengers from downtown Cebu City to Barangays Guadalupe and Bulacao in the south district and the SM City Mall in the north district where public utility jeepneys and passenger vans were available.