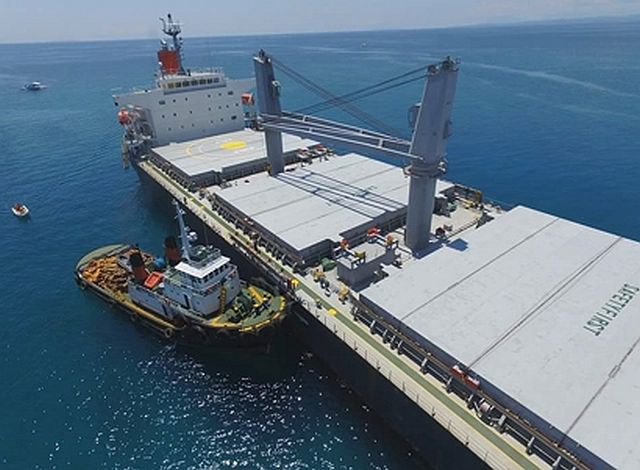 The vessel which ran aground in Monad Shoal last month has been allowed to set sail to Subic Bay, Zambales for repairs after the Cebu provincial government received without objection the ship owner’s letter of guarantee ensuring the payment of a maximum amount of $1.5 million for the rehabilitation of the damaged area in Malapascua Island.

In that meeting, Faytaren handed over the letter of guarantee to Davide who in turn signed it with no objection.

Faytaren told reporters that the amount to be paid will be covered by the Japan Ship Owner’s Mutual Protection & Indemnity Club, the ship company’s insurance provider.

The letter of undertaking was to ensure that the ship company will be paying for damages caused by MV Belle Rose when the cargo vessel hit a shallow portion of the shoal and damaged about three hectares of the protected area affecting Brain Coral species locally called “Tampulong” and “Binagong”.

Monad Shoal in the northern municipality of Daanbantayan is part of the Malapascua dive spot considered one of the country’s best dive sites.

Faytaren explained that the $1.5 million is the maximum amount that the company could offer to cover expenses for the shoal’s rehabilitation as well as the cost of projects that will be implemented for affected fishermen in the area.

Tribunalo for his part said that the downloading of the funds will begin after the creation of a project management office which will oversee the implementation of the programs for Monad Shoal.

Based on a joint  assessment conducted by the multi-sectoral Task Force Monad Shoal, at least two hectares of the damaged shoal need to be rehabilitated.

The funds, once downloaded to the Cebu Provincial Government, will go to its trust fund.

It will be the responsibility of the provincial government to account for the funds once these are spent, said Tribunalo.

The vessel is currently docked in Naga City, Southern Cebu after it was pulled out of the shoal to deliver 48,000 MT cargo of clinker, a raw material used in making cement.