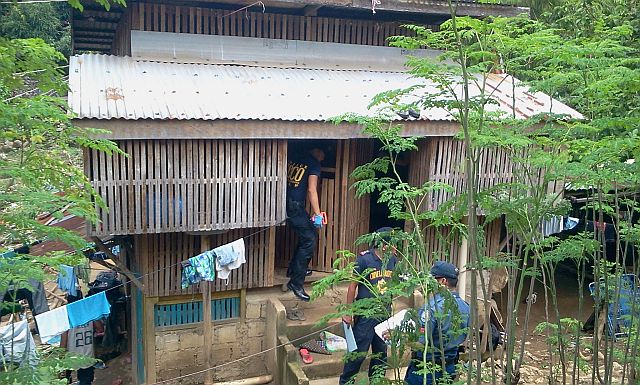 A 33-year-old man died after he was shot by responding policemen from the Special Weapons and Tactics (SWAT) during a hostage drama at Almer’s compound in Barangay Tabok, Mandaue City past 8 a.m. yesterday.

Alfie Perales, 33, sustained a gunshot wound in the head, causing his instantaneous death.

The suspect had earlier killed his uncle Faustino Perales, 43, minutes before the police arrived shortly before 9 a.m.

Julia Villamor, 52, wife of Faustino, recounted that the night before the incident, Alfie, who was allegedly a drug user, was restless, afraid of persons looking for him and allegedly wanted to kill him.

Yesterday morning, Alfie went to his uncle’s house, took a knife there and without provocation stabbed his cousin James Perales, 19, son of Faustino.

James’ sister Aileen, 20, came to his rescue but was also stabbed by Alfie in the arms.

Edison Otadoy, 20, a boarder of the Perales family who occupies a room on the second floor, tried to get the kitchen knife from Alfie but was also stabbed in the arms and body, prompting him to run outside.

Welmar Magdaraog, 39, also a boarder who shares a room with Otadoy, had just arrived from work when he was also chased by the suspect.

The suspect went back upstairs and held hostage his other cousin Karen, 21, (eldest child of Faustino), Karen’s husband Albert John Lawas, 21, and their 8-month-old baby girl.

Aileen and James went to Faustino, who was at the main road about 200 meters away from their house, and informed him of the incident.

Faustino immediately went to Alfie’s house and looked for him unaware that the latter was behind him. Alfie stabbed him several times in the back.

Alfie went back upstairs and took hostage the 8-month-old baby with a knife pointed at her neck.

Karen and her husband tried to grab their daughter, but Albert John was stabbed and Karen sustained a graze wound in her back prompting them to back off and stay at the corner. Alfie even threatened to kill them, including the baby.

Police arrived and PO3 Ricardo Petiluna started negotiating with the suspect. The negotiation lasted for an hour. The SWAT police had positioned themselves until they found a chance to carry out the assault and shoot the suspect.

Karen was able to grab the baby and run outside with her wounded husband. They were then brought to the hospital by a waiting ambulance.

Alfie’s mother, Sonia, said her son might have had ill feelings towards Faustino after the latter allegedly killed her husband 15 years ago.