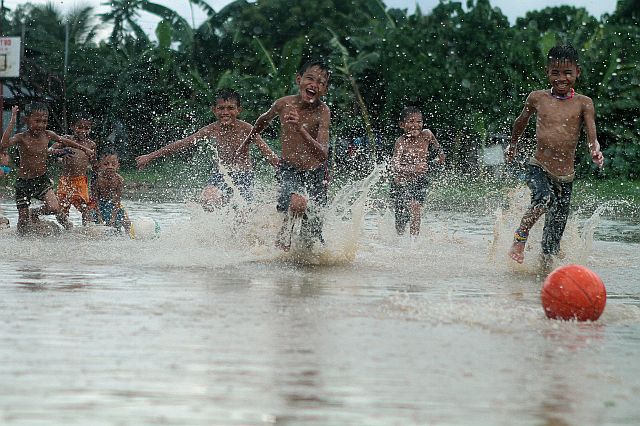 KIDS PLAY. The hassle of flood and traffic that exasperated commuters across Metro Cebu has not touched these kids in Barangay Basak, Lapu-Lapu City who happily spent their rainy Sunday morning playing basketball in a rain pond. (CDN PHOTO/FERDINAND R. EDRALIN)

Still coping with the effects of the rain-induced floods that hit Metro Cebu on Friday, Cebuanos were told yesterday to again brace for more heavy rainfall when a tropical storm enters the Philippine Area of Responsibility (PAR) on Tuesday.

Disaster Risk Reduction Management Councils (DRRMCs) in the cities of Cebu and Mandaue – two of the heaviest flooded areas on Friday – yesterday placed their respective disaster response units on standby and alert status after the low pressure area outside of PAR has turned into a tropical storm yesterday morning.

The heavy rain from the approaching tropical storm (international name: Nepartak) is projected to again cause flooding in many areas in Metro Cebu, which, in just two days, already received more than the average amount of rainfall it was supposed to get this month.

The Philippine Atmospheric Geophysical and Astronomical Services Administration (Pagasa) Mactan recorded 56.8 millimeter (mm) of rain on July 1 and 151.9 mm of rain on July 2, or a total of 217.7 mm of rainfall in just two days. The amount of rain already exceeded 202 mm, the projected average rainfall to hit Cebu in July.

The rains experienced in Cebu on July 1 and 2 were above normal because, as earlier explained by Pagasa Mactan chief Alfredo Quiblat, 20 mm of rain in at least an hour could already cause flooding in low-lying areas.

TS Nepartak would be named “Butchoy” when it enters the country tomorrow, bringing more rains across many parts of the Visayas and Southern Luzon, said Pagasa Mactan weather specialist Vhan Singson.

Once inside the PAR, Butchoy is not likely to directly affect Cebu, but it will enhance the southwest monsoon (Habagat) and will bring more rains and winds on the entire island, said Singson.

As of 4 p.m. yesterday, Pagasa said the center of TS Nepartak was estimated at 2,060 kilometers east of Mindanao, with maximum sustained winds of 65 kilometers per hour (kph) near the center and gustiness of up to 80 kph. It was moving northwest at seven kph.
“No public storm signal raised yet since it has not entered PAR,” added Singson.

To prevent a repeat of Friday night’s flooding, Mandaue City workers yesterday dredged Mahiga Creek in Barangay Subangdaku to clear its water way of debris. The creek, located at the boundary of the cities of Cebu and Mandaue, is a tributary for smaller waterways from upland areas of both cities.

Mandaue’s PIO posted on Saturday night the city’s emergency hotlines on their Facebook page. These are 344-3891,239-7386 and 09333359327.
Mandaue City’s DRRMC chief Felix Suico said disaster units in the city would be placed on blue alert today, which means that all off-duty personnel would be placed on call.

He said barangay captains in the city were advised to monitor flood- and landslide-prone areas, like Barangays Cubacub, Casili and Tawason.
Equipment and vehicles are also now on standby at the Mandaue City Hall.

With a number of areas in Mandaue still submerged in ankle-to-knee-deep water since Friday, Suico said they also advised residents especially those living along creeks to monitor the weather and do a preemptive evacuation and not just wait until the weather worsens.

Schools and gymnasiums will serve as evacuation centers in case there is a need to evacuate.

Last Friday, 14 families in Barangay Subangdaku, Mandaue City had to be evacuated after their houses were flooded when Mahiga Creek overflowed.
Suico said the fire victims of Barangays Guizo and Mantuyong who are now temporarily staying at the Cebu International Convention Center (CICC) grounds could be transferred to the Mandaue Sports Complex should evacuation becomes necessary.

In Cebu City, DRRMC chief Nagiel Bañacia said the city’s 30 disaster personnel were placed on standby to respond to emergency situations.
He said the city’s disaster workers and heads of the different city hall offices would also be called to a meeting today to discuss preparations for TS Butchoy’s arrival tomorrow.

He said that while the city now owns rescue equipment that include ropes and life vests, not all of their 30 disaster personnel were trained on their proper use.

John Paul Gelasque, head of the city’s Department of Public Services (DPS), said they would also start desilting of canals today to ensure unobstructed flow of rainwater when heavy rains come. He noted that mud and garbage filled canals across many areas in Cebu City after Friday night’s rains.

Desilting will especially be focused on canals located in the city’s downtown area and along major thoroughfares, including Osmeña Boulevard and M.J. Cuenco Avenue to prevent another massive flooding in these areas.

Gelasque said more than 200 street cleaners would be deployed starting today to work on three shifts with about 65 personnel per shift.
“Rain or shine, ato gyong limpyohon ang atong mga kadalanan. But if naa nay flooding, dili sad nako irisgo ang akong mga tawo (We will make sure that city streets are garbage free. But when there is already flooding, we will not risk the safety of my personnel),” he, however, said.

Read Next
Two areas in Talamban still submerged in flood