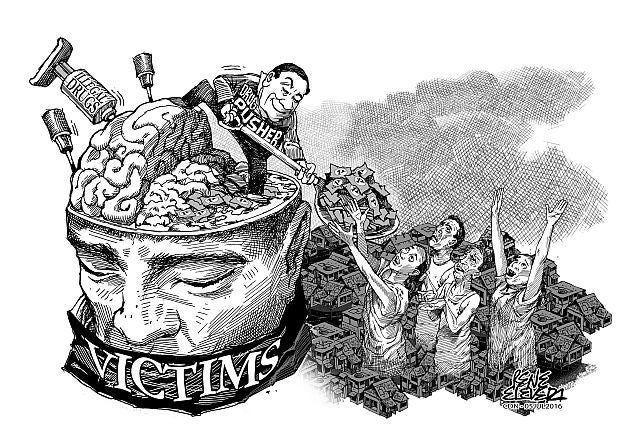 Despite the number of suspected drug dealers and drug users that have been coming out of the woodwork to surrender to police, the burial procession for slain suspected drug dealer Jeffrey “Jaguar” Diaz in Barangay Duljo Fatima, Cebu City is a telling reminder that the war against illegal drugs may not only be far from over but may only be escalating.

Supporters of Diaz counted those who attended the procession at over 10,000 but police estimated the crowd at 2,500 to 3,000. And the number was large enough to bar police officers or traffic enforcers from doing crowd control, aggravating traffic congestion heading to the public cemetery.

Senior Supt. Benjamin Santos, Cebu City police chief, also said that a lot of people were paid to attend the procession and bid farewell to Diaz, said to be the second-ranked drug dealer in Central Visayas after Alvaro “Barok” Alvaro, who surrendered to authorities last week.

That fact alone reinforces the warning issued by President Rodrigo Duterte during his visit to Cebu City for a thanksgiving concert the other week about the looming possibility of narco-politics seizing control of the country in a matter of years.

And suspected drug dealers like Diaz and Alvarez know, perhaps out of their own experience or copying from drug lords like Columbian drug lord Pablo Escobar, that they can only establish their kingdom if they win the support of the people in their area.

A lot of people who attended the burial procession of Diaz may or may not have known him from Adam since they were only paid to do so but the man has a loyal following in Duljo Fatima who remembered his generosity well enough for them to look beyond and ignore stories of him as a drug dealer.

The same sad episode can be seen in Banacon islet, Getafe town in Bohol province where a community paid tribute to suspected drug lord Rowen Secretaria, who was shot down along with suspected cohorts last May.

Duterte can order the full might of both the police and the military to bear down and blow up these drug dealers to kingdom come but what about those people who were bought and influenced by drug money to become sympathizers and the eyes and ears of these criminals?

We have to ask Duljo Fatima Barangay Chairman Elmer Abella why he allowed someone with obvious drug ties like Diaz to not only stay but thrive in his area for all these years.

It was no small coincidence that the city police held an anti-drug rally at the same time that Diaz’s followers came out en masse to attend his burial procession.

It will take more than rallies and an anti-drug seminar to eliminate Diaz’s lingering influence in Duljo Fatima and Cebu City Mayor Tomas Osmeña has his work cut out for him in eradicating the stench of illegal drugs in that barangay.