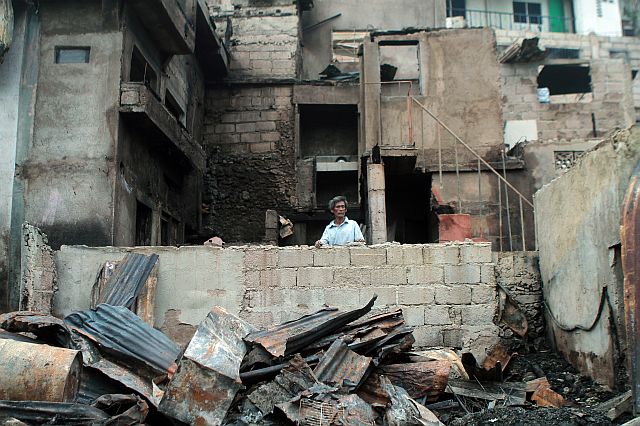 Fire victim Prospero Talaogonon ponders on what to do after his home got burned down by Tuesday evening’s fire. (CDN Photo/Ferdinand Edralin )

Grace Banzuelo, 30, told Cebu Daily News that she was unable to save even the clothes of her four children.

She said that her house was just beside the house where the fire started.

Banzuelo said her house was easily gutted by the fire because it was made of light materials. She and her children took shelter inside a small chapel near the fire site.

Another fire victim Gemma Villarin, 50, said she was cooking when the fire broke out and it was too late to salvage her things because the fire was already big.

“Nisuway kog kuha sa among TV pero baga na kaayo ang aso ug nalipong nako mao to gibira na lang ko sa akong anak para mogawas nami (I tried to save our TV but the thick smoke made me dizzy so my daughter pulled me out of the house),” she said.

She said her house was just two houses away from where the fire started.

Banzuelo and Villarin are among the 96 families, or 384 individuals, who were confirmed by the Department of Social Welfare and Services (DSWS) as having been displaced by the Tuesday night’s fire which took firefighters two hours to control.

DSWS data showed that there were 40 houses, 34 totally burnt and 6 partially burnt.

He also said he is planning to create a livelihood program for fire victims.

“We might give special privileges but on a limited basis for the fire victims so that they can raise money. But this is a new concept. It is only temporary for people whose homes are demolished and have no relocation site. But we are going to give special consideration to the poor because we are trying to reach out those who need it the most,” Osmeña said.

He said he will allow fire victims to sell in Carbon Public Market and Night Market in Colon, among others.

According to the mayor, they are now studying the process and are approaching the program carefully.

“That’s why we have to talk to them (fire victims in Capitol Site) just to give them something to start with because they were dislocated,” he said.

The mayor is also amenable to reblocking the area to provide better access but he said this will have to be decided by the barangay.

Osmeña said that one way to prevent fire from spreading is to provide fire extinguishers to some residents in the barangays.

The barangay fire brigades should group residents and train them in firefighting and how to avoid fires. The most organized groups will be given fire extinguishers by the city government.

“We will organize these organizations. Very simple. We will find out if they are disciplined enough and we will give them fire extinguisher. So that if somebody’s house is burning, they don’t have to call the fire department. They simply have to get the fire extinguisher,” he said.

He said the one who will keep the fire extinguisher must be known to all in the area.

“I believe that this should be able to track down the fire cases. Why wait for the firetruck intawon nga by the time the firetruck arrives, already 20 houses have burned down,” he said.

He said that fire extinguishers will be charged to the calamity fund, and the Cebu City Disaster Risk Reduction Management Office will be the one to oversee this program.