How to court farmers to say “yes” to good agricultural practices 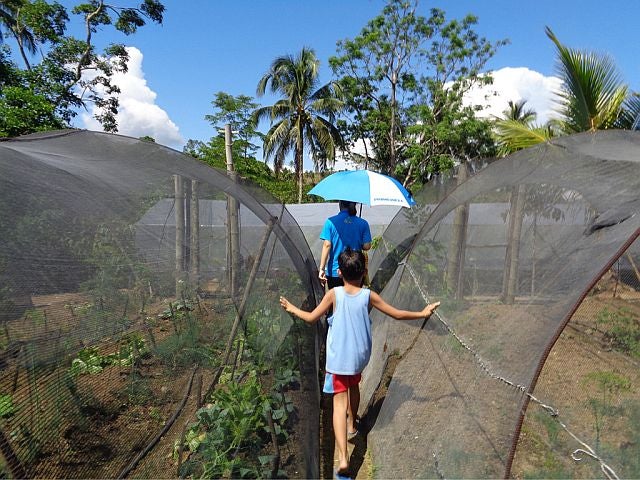 Nets are one way to physically control pests and get them away from crops but not many farmers can afford to invest on this. (BY/ FRAULINE SINSON)

Change is not always welcome, especially when it’s not as easy as the old way. That is why some conventional farmers find it hard to adjust to good agricultural practices or GAP, which is being advocated by government, private sector and non-government organizations.

GAP are audits that verify that fruits and vegetables are produced, packed, handled and stored as safely as possible to minimize risks of microbial food safety hazards. Farmers need to get a certification that they are following GAP.

As part of GAP, Bert Castillo, chief agriculturist at the Integrated Laboratories Division of the Department of Agriculture in Central Visayas (DA-7), says the government is promoting its Integrated Pest Management (IPM) program, which involves the proper selection and use of suitable pest management practices to reduce pest injury at levels below those causing significant loss.

Castillo explains that it starts with the proper selection of seeds. There are seed varieties that can tolerate pests. The land also needs to be properly prepared. Tilling the land can expose worms pupating in the soil. Exposure to sunlight can kill these pests. There’s also proper fertilization of the soil.

Pests can also be biologically controlled, Castillo adds. Not all insects are harmful. Predators such as spiders, dragonflies and damselflies can help control pests, but they die when farmers use insecticides. Parasitoids and microbial pesticides can also be introduced to kill the pests at its pupa stage. There are also physical controls that can be put into place like nets and trees that repel insects.

The judicious use of chemical pesticides that are safest to human will have to be the last option, according to Castillo.

Nazareno Coca, 63, has been farming for 50 years. Together with his wife Mediañera, they grow corn, string beans, squash, chilis, cucumber, kangkong, and many others in Barangay Adlaon, Cebu City.

Coca and his wife have never met anyone from the DA and they have never heard of GAP.

According to Coca, his farming practices are based on common sense. Asked whether he has heard about organic farming, he says yes but nothing good. With a frown and a shake of his head, Coca asserts that a farmer can’t harvest much without chemical fertilizers and pesticides.

Castillo says that in his 30 years of personally working with farmers, it is not easy to change their old ways.

“Conventional farming is the easiest way for them to control pests. They want to see the insects go belly up, their feet in the air, right after they spray their crops,” he says. “But little by little, they are coming around.”

Juanito Redelosa, 61, from Barangay Sirao, Cebu City, learned about GAP when he became a member of the Sirao Farmers’ Association. He uses less pesticides now after attending seminars and trainings with the DA.

However, Redelosa says he can’t fault conventional farmers for clinging to the old ways.

Losses mean farmers would have to borrow money in order to survive until their next harvest. Competition is tough and small-time farmers are desperate to stay afloat. “Kung maalkanse, mangutang. Kung wala’y magpa-utang, ibaligya ang baka o ang kanding (If we lose money, we borrow money. If nobody lends us money, then we’d have to sell our cow or a goat),” says Redelosa.

Redelosa’s own change of heart when it came to adopting GAP was a result of the physical effects he felt from decades of exposure to chemical pesticides. Six years ago when he was 55, Redelosa got admitted to the hospital because he felt faint, had chest pains and had difficulty breathing. He was hospitalized for over a month.

Olivia Jumapao, science research specialist at the Department of Agriculture Region 7, shows CDN how she transfers fungus culture to some slants. She cultivates fungi to fight pests. The cultured fungi are then poured to cracked corn, which is used as medium. The DA provides biopesticides to farmers for free to encourage them to use less chemical pesticides. (BY/ Frauline Sinson)

Sherefel Rosalejos, 33, manages an organic farm in Barangay Maloray, Dalaguete, Cebu and is concerned over the aggressive sale of chemical pesticides and herbicides, as this is counterproductive to farmers who are trying to adapt to GAP.

Rosalejos says there are independent sales agents riding on motorcycles and selling chemicals to farmers in the mountains. These agents make demonstrations just beside the road, spraying chemicals on the weeds just to prove to farmers how effective their products are.

Rosalejos wonders if the government has been monitoring if these agents have a license to sell these products, or they might even be banned products.

According to Castillo, there are four categories of pesticides and these are color coded: highly toxic (red), moderately toxic (yellow), slightly toxic (blue), and relatively toxic (green). Red labels are banned or restricted. The oral lethal dose for red labels is 1-50 milligrams per kilogram of body weight.

Redelosa admits he used red label pesticides in the past when he took on the job of spraying mangoes at neighboring farms. He didn’t use a mask because it was cumbersome and he found it difficult to breathe.

Redelosa relates that red label pesticides are not sold in stores but usually in the house of some unscrupulous people in the mountains. These banned chemicals usually come from Mindanao passing through Bohol before arriving in Cebu, he reveals.

The red labels cost P1,000 per gram or higher. To avoid detection, they are ordered in large volumes and delivered by a van. They are then sold in smaller quantities to farmers.

Castillo says the Fertilizer and Pesticide Authority (FPA) is the one that handles the regulation of these chemicals. But the agency has only two regular employees for the entire Central Visayas and it has no police power to apprehend any violators.

Arnulfo Arausa Jr., chief of FPA Region 7, says they have limited manpower to handle monitoring of banned chemicals right now but they are expecting additional people to join their team. “Naningkamot gyud mi nga mamonitor gyud namo (We are really trying our best to monitor),” he says.
Arausa says they partnered with technicians from private distributors in conducting seminars for the safe use of chemicals.

The FPA also conducts trainings in relation to licensing of dealers. They also encourage people to report unlicensed dealers. For those found violating, Arausa says they will talk to them and encourage them to attend training. If they refuse, Arausa says they can forward the case to the national government for legal action.

Read Next
No money in dead drug suspects