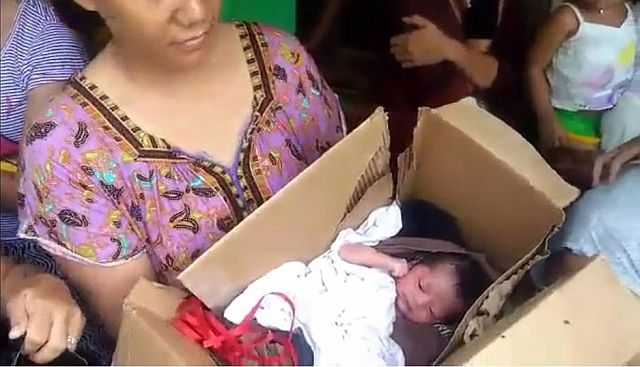 Musa Ursal shows the baby in the box found at a dumpsite near her store. (CDN Photo/Norman V. Mendoza)

A newly born baby girl was found inside a carton box near a dumpsite along Sangi Road in Barangay Pajo, Lapu-Lapu City at past 5 a.m. yesterday.

Store owner identified as Musa Ursal said she went out of her home to clean when she noticed a carton box moving and heard the baby crying.

She immediately checked on the box and then took the baby.

Ursal showed the baby to her neighbors and asked them if they saw somebody who left the baby at the dumpsite and if anyone had been looking for her.

When the neighbors said they didn’t, Ursal took the baby to her house and called the police, who sent an ambulance that brought the baby to Lapu-Lapu City Hospital.

The baby underwent examination after doctors found that her umbilical cord was not cut properly.

Hospital chief Dr. Bolivar Miñoza said if no one claimed the baby, she will be turned over to a non-government organization authorized by the City Social Welfare Services Office.

The NGO will process and search for those interested and qualified to adopt the girl. The police are coordinating with the barangays to trace the mother’s whereabouts.