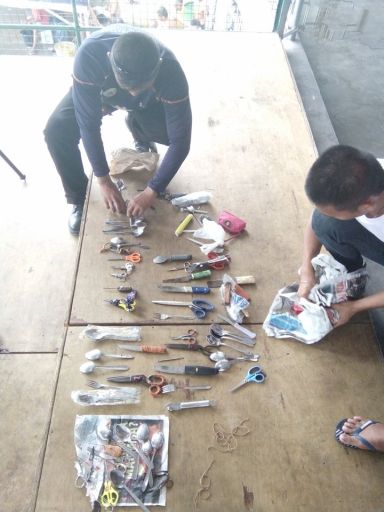 Some of the sharp and pointed objects that were handed over. CONTRIBUTED.

Knives, scissors and other sharp and pointed objects were turned over by inmates of the Cebu Provincial Detention and Rehabilitation Center (CPDRC) on Thursday morning.

Marco Toral, Capitol consultant on jail matters, said the inmates surrendered the prohibited items after he fired a warning shot inside the facility.

He said he fired the warning shot after four other inmates were hit with paddles for gambling inside their cells despite being told off several times already.

Lito Granada, the designated “mayor” of the inmates, said most of the inmates use the items if they want to eat. But he said it’s still not allowed.

Read Next
Male fetus found in river in Kalunasan