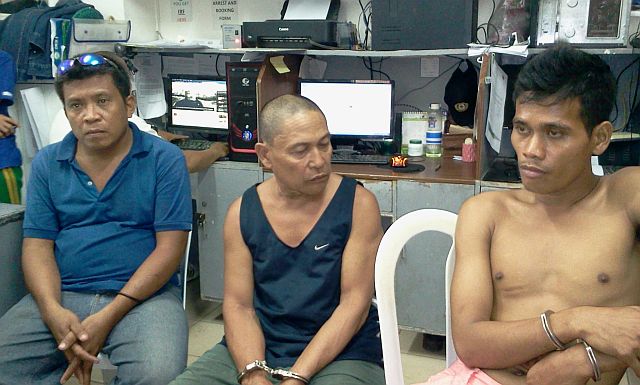 THE suspects in the killing of one Armando Tuico in Mandaue City last Tuesday morning were arrested by the police in the afternoon of the following day.

Rogelio Catipay, 62, a sales attendant from Cebu City but currently residing in Barangay Maguikay, Mandaue City, was tagged as the mastermind in shooting to death Tuico last Tuesday morning in Barangay Ibabao.

Catipay allegedly hired Gecale to kill Tuico for P5,000. Catipay reportedly promised to give Gecale an initial payment of P3,000 and another P2,000 if Tuico got killed.

Catipay, a married man, allegedly got angry at his former lover Liza Singson, who left him for Tuico starting late last year when their relationship turned sour after 20 years.

Catipay had threatened Singson that something would happen to them (Singson and Tuico) if she won’t come back to him.

Last Tuesday morning, Tuico was shot dead while buying a viand near his residence in Barangay Ibabao.

In a follow-up operation, Singson admitted to the operatives of the Investigation and Detective Management Branch of the Mandaue City Police Office led by SPO4 Marcos Noval that she earlier received a threat from Catipay.

The police arrested Catipay the following day at the Cebu Metropolitan Cathedral, where he met Singson. Two witnesses, a 17-year-old girl and a certain Jessie Brillo, identified him as one of the suspects.

Catipay later broke down in tears and admitted to Singson that he paid somebody to kill Tuico.

Catipay then identified his cohorts that resulted to the arrest of Berondo in Barangay Tabunok, Talisay City and Gecale in Barangay San Nicolas. The .357 revolver allegedly used in the killing of Tuico was also recovered from Gecale.

The 17-year-old witness described the man who shot Tuico as having tattoos in the arms and protruding hair in the nape.

Few minutes before the incident, Brillo said he noticed the three suspects standing along the road near a multicab. One of them, whom he identified as Catipay, allegedly gave something wrapped in a newspaper to Gecale.