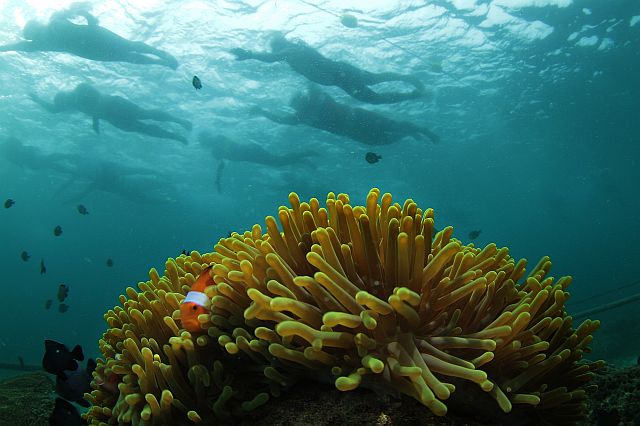 Swimmers competing in the Cobra IronMan Asia-Pacific Championships pass over a healthy patch of corals at the seabed of the Hilutungan Channel.

With one of his toughest rivals out of the picture because of an injury, Australian Tim Reed went on to rule the Cobra IronMan 70.3 Asia-Pacific Championships yesterday at the Shangri-la’s Mactan Resort and Spa in Lapu-Lapu City.

Their rematch was much anticipated in this year’s race, but Van Berkel met an accident in a pre-race bike out on Saturday that forced him to skip the race.

Van Berkel sustained scratches and bruises in his arms, legs and head after crashing in a road in Mactan during the bike out.

“It made it easier for me to race without him but a part of me was lost when he met an accident,” Reed said. “I felt upset because we had a great battle last year, and I was really looking forward to another nice race. I feel bad for him because he’s one of my best friends, so I wish him a fast recovery.”

Since he wasn’t able to join the race, Van Berkel managed to still be part of the race by being a commentator for the event’s live streaming online. 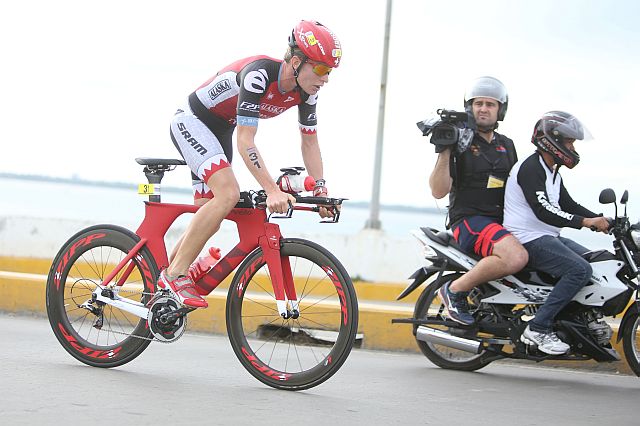 Caroline Steffen of Switzerland is being filmed during her bike leg at the SRP South Road Properties in Cebu City. (CDN PHOTO/Lito Tecson)

In the Women’s Pro division, 38-year-old Caroline Steffen of Switzerland won her fourth straight race in the country after clocking 4:16.19.

Steffen, a member of the Alaska Triaspire, beat erstwhile race leader Radka Vodickova of Czech Republic to the finish line as the latter settled for second place, finishing the race in 4:18.29. Third placer was Australia’s Sarah Crowley (4:21.53).

Meanwhile, August Benedicto, also of Alaska Triaspire, clinched his fourth Filipino Elite crown by finishing the race in 4:26.46. Boholano Paul Jumamil settled for second place with a time of 4:27.49 while John Leerams Chicano wound up third, clocking in at 4:28.04.

Benedicto admitted that this year’s race seemed tougher than before that he needed to improvise.

“The race gets tougher each year. They (competitors) are faster compared to the first time I won the title in 2012 here in Cebu, so I banked on my experience. I let them take the lead at first so they’d be tired when they reach the 21k run,” Benedicto said.

Monica Torres also defended her title in the distaff side by clocking 4:45.54, beating her lone foe in the division Maria Hodges, who finished in 5:07.02.