Rebuilding the CCMC is a necessity 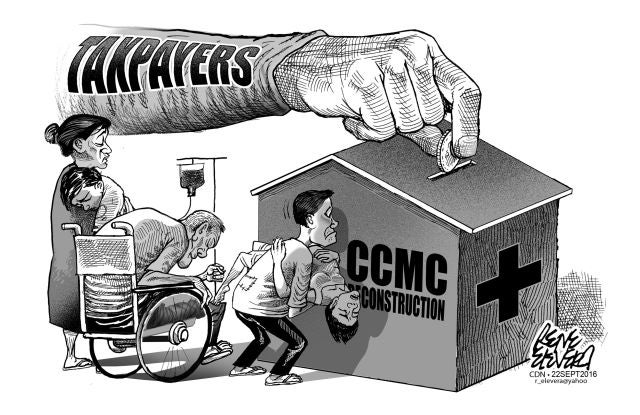 At a time when Cebu City Mayor Tomas Osmeña has shown little to no concern over the fate of the Cebu City Medical Center (CCMC) came recent news about the resumption of the reconstruction work on the city hospital which should give the urban poor something to cheer about.

Councilor Mary Ann delos Santos, who was appointed deputy mayor for health services, was only too happy to announce the news that the contractor managed to work out the deficiencies of the project to allow its resumption by the Office of the Building Official (OBO).

The councilor, whose removal from the committee tasked to oversee the project during the Rama administration came after she pointed out the deficiencies of one of the bidders for the city hospital reconstruction, assured the public that work would resume this year in order to dispel doubts and concerns from those who only wish that the city can still have its own hospital.

Mayor Osmeña, who actively lobbied for the devolution of health services to the barangays and the cancellation of the project in favor of universal PhilHealth coverage for the urban poor, surprisingly supported the continuation of the hospital reconstruction and even went so far as to say that his administration is committed to finishing the project.

Which is a good thing, to say the least, though we can imagine that the city hospital won’t be built as envisioned by former mayor Michael Rama, who promised that the city will have a world-class hospital comparable to the best in the country.

No thanks to Rama’s loss, the fate of the CCMC was uncertain after Osmeña’s victory. Mayor Osmeña, who thought of the CCMC as one large money pit, was all too eager to scrap the rebuilding project and had previously courted businessman Manny Pangilinan to build and operate a hospital in Cebu City.
But even the mayor himself acknowledged that city residents, especially the urban poor whom he counts as a vital constituency, have long clamored for a city-owned and managed hospital that could care for and provide them free medicines.

Universal medical coverage which Osmeña pegged at over P100,000 can still be given in order to complement the medical package for the city’s poor. But then, can the city afford it? While the mayor’s concern for the city’s finances is understandable, public clamor and need for a city hospital override his reluctance to spend millions for a social service that will be paid for by the city’s taxpayers.

At this time when basic social services are still insufficient for one reason or another, the Osmeña administration must have realized that a city-owned and managed hospital is not a luxury that can be scrapped from a “skin and bones” city budget but a necessity for the greater number of city constituents.

Read Next
Why the Marcos dictatorship failed