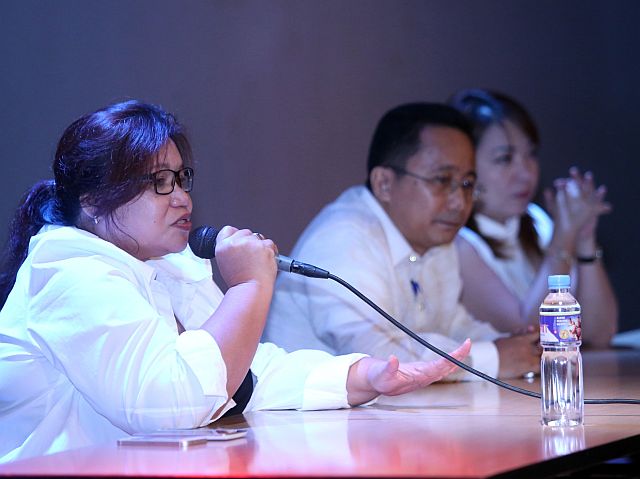 Cebu Daily News Editor in Chief Edralyn Benedicto explains the role of media in these trying times before a group of more than a hundred students from the University of Cebu, University of the Visayas and University of the Philippines College Cebu after a CDN-sponsored film showing of the 2016 Academy Award Best Picture, Spotlight. The award-winning film is a story on how a team of investigative reporters from the Boston Globe hurdled obstacles to expose the molestation of children by several Catholic priests. With her in the panel is Atty. Gonzalo “Sally” Malig-on President of the Integrated Bar of the Philippines Cebu Chapter and CDN contributing editor Rosemarie Holganza-Borromeo (CDN PHOTO/LITO TECSON).

While mainstream media such as newspapers are being challenged by various digital media platforms, the basic principles of fairness, accuracy, and adherence to the truth remain as guidelines for journalists as they perform their roles as society’s watchdogs.

This was emphasized yesterday by panelists — composed of two journalists and a lawyer — during the review and discussion after the viewing of the Academy Award-winning film Spotlight.

The film starring Michael Keaton, Rachel McAdams and Mark Ruffalo narrates the real-life account of how a team of Boston Globe journalists investigated cases of child abuse by Roman Catholic priests in the Boston area.

It was nominated in six categories and won Best Picture and Best Original Screenplay in the 2016 Academy Awards.

“I always tell the new breed of journalists that you’re only as good as your last story so make sure that your stories are credible, factual, and real … and your storytelling mirrors the truth. These principles remain the same through generations … principles that journalists tried to live with all these years,” said Cebu Daily News (CDN) editor-in-chief Edralyn Benedicto.

Benedicto, whose journalism career spans more than 30 years, related her experiences when she had to write stories that affected the lives of friends and news sources.
By letting students see films like Spotlight and discussing the issues presented in the films, Benedicto said she hopes that the public will have a better appreciation of the kind of work journalists do.

“Journalism is not a glamorous job. There is a lot of hard work, research, and passion put into this work,” said Benedicto.

Lawyer Gonzalo Malig-on, who is president of the Integrated Bar of the Philippines Cebu Chapter, noted the crucial role of the media in society especially in exposing issues such as the Pork Barrel Scam.

“We see the power of media to effect change in society. That is why there is no law that can be made abridging freedom of the press because media plays a critical role in society,” said Malig-on.

Malig-on lauded “real journalists” who do research and interview multiple sources before publishing their stories.

“These practices distinguish them from fake journalists. Because a good story should not just be an interesting story, it should also be truthful,” he said.

CDN contributing editor Rosemarie Holganza-Borromeo stressed the importance of being responsible social media users and called on participants to be smart in distinguishing credible news organizations from fake websites.

“Discern where you get your news. Notice websites which have many grammatical errors or pages which are clearly written by social media trolls. Be responsible social media users,” said Borromeo, a practicing journalist for more than 20 years.

When asked how journalists can protect themselves against threats made to them, Benedicto said: “If you are fair and truthful in your reporting, you should not be afraid. The truth is your protection.”

Malig-on expressed concern on the culture of permissive violence that has taken over the Philippine society.

“To be fair is a form of protection for journalists. But another critical protection is dependent on the culture of society. I am afraid that even if a reporting is fair and accurate, death will be considered as a valid norm of retribution,” he said.

Answering questions from students on the challenges faced by journalists, Benedicto narrated events when the newspapers such as Philippine Daily Inquirer and CDN faced grave threats and intimidation from individuals and organizations which tested journalistic principles.

“But who are we serving as independent journalists? What is our role as journalists if we are afraid of these people? What are we here for? These were the questions that we asked ourselves,” she said.

The film showing yesterday was attended by 125 students from the University of Cebu Main Campus, University of the Visayas and University of the Philippines College Cebu.
The event was sponsored by Minute Burger, J Centre Mall, GT Cosmetics, and Ralfe Gourmet/The Chocolate Chamber.