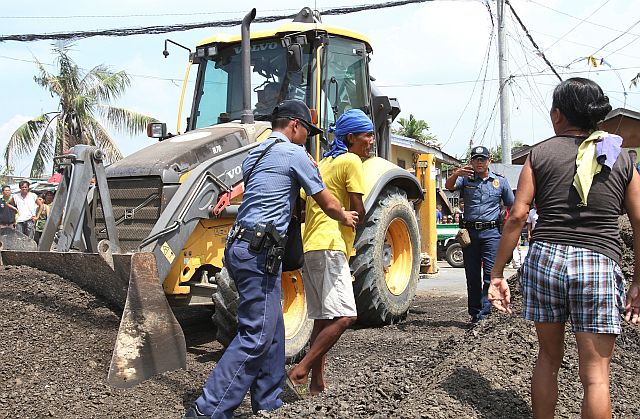 A police officer stops a fire victim from blocking a bulldozer at the fire site in this June 3, 2016 file photo.

The fire victims of Barangays Guizo and Mantuyong in Mandaue City may spend Christmas rebuilding their houses in the lot where they once stood before they went up in flames.

Tony Pet Juanico, head of Mandaue City Hall’s Housing and Urban Development Office, said the reblocking of the 1.9-hectare fire site is expected to be completed in November this year.

Juanico said the area was already elevated and flattened, and work on wider roads and distribution of a 28-square-meter lot for each beneficiary will follow.

“We will do our very best to be able to finish the reblocking by end of November so the beneficiaries can start rebuilding their homes,” Juanico said.

He said not everyone can be accommodated so they will look for another lot to relocate some of the families and give cash assistance to those willing to go back to the countryside.

Mandaue City Mayor Luigi Quisumbing said they were obligated to follow the standards set by the Urban Development and Housing Act (UDHA), giving each housing beneficiary at least 28-square-meter lots.

He said if all beneficiaries will be accommodated at the 1.9-hectare city donated lot, each beneficiary will only have a 14-square-meter lot area.

“We were planning of constructing a medium rise condominium in the area just to accommodate them all, but we have financial limitations and I don’t think we can make a bank loan for this housing project,” Quisumbing said.

He said it would cost P650 million to P1.3 billion including the site development to fully house all fire victims.

Quisumbing said the best cost effective option was to purchase a lot outside the Mantuyong and Guizo areas to relocate some beneficiaries.