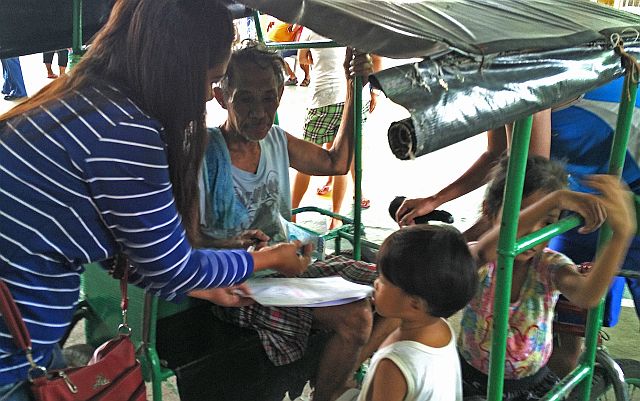 Just like the last time, yesterday’s distribution of cash aid in several barangays in Cebu City were held at the homes of incumbent and former barangay officials identified with the Bando Osmeña-Pundok Kauswagan (BO-PK).

This was the second time that his home was used as a distribution center.

Ramos said the distribution started at 6 a.m. and was orderly as it took them three days to inform the seniors about the date and venue of the activity.

There were some who still headed to the barangay covered court, but he had them fetched from their homes to his home using his five vehicles.

“They now know that this is where the cash aid is distributed, unlike before,” Ramos said.

Disbursing officers visited bedridden elders to distribute the cash assistance in their homes.

The Office of the Senior Citizens Affairs (OSCA) said the remaining P3,000 cash aid will be given on or before Christmas Day.

Ramos provided five service vehicles to pick up the senior citizens who were then driven back to their homes.

Both Roberto Inocando and 62-year-old Carmencita Nacorda said they received the cash aid with no problems.

Senior citizens used to claim their financial aid at the barangay covered court.

“I am only following the order of Mayor Osmeña. That’s what Rama also did before. He also had his own people,” Ramos said.

The barangay’s covered court, which is adjacent to its barangay hall, is occupied by teenagers playing basketball.

“The sports complex was open, but they didn’t use it. So be it,” Barangay Quiot Chairman Francis Espariz said.

In Barangay Sambag I, the cash distribution for seniors was held at the Aznar Coliseum.

“So long as the seniors are comfortable with the change, why should I stop it?” said the younger Alcover, son of Councilor and Team Rama ally Jun Alcover.

Read Next
Teacher Vivian and her kit that detects cassava cyanide