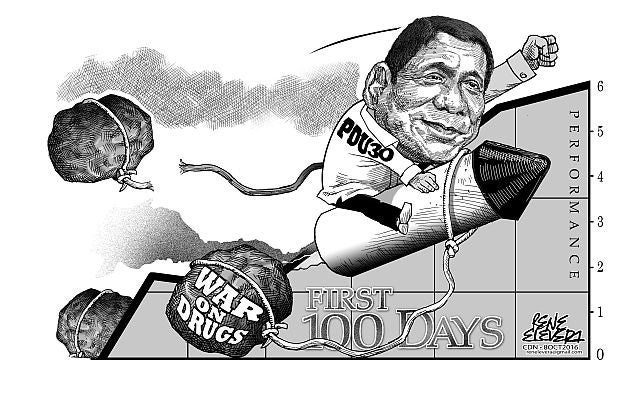 In rating his performance for his first 100 days in office, President Rodrigo Duterte at least had some humility in rating himself a six out of 10 in contrast to his predecessors who rated themselves more than a seven out of 10 despite the controversies hounding their respective administrations.

But the President cannot afford to give himself a high rating as he himself admitted that the drug menace, his one pet project, is bigger than he thought, and he asked for a six-month extension to wipe it out, unrealistic that target may be.

His self rating also comes amid a 75 percent survey rating shown recently, a drop from the 91 percent he enjoyed barely a month after assuming office. But as we all know, the law of averages will soon catch up to his administration, and it’s only a question of time before we know when the plunge will occur.

In the meantime, his combative, abrasive behavior fueled by the cadre of communist leaders with whom he is conducting peace talks with continues to erode any relations with the US, the European Union and other Western nations, favoring China and Russia whose ideologies and dictatorial principles he has publicly declared himself to differ from but whose underlying principles he not only embraced but practiced.

Whatever differences or hatred he may have towards these countries that voiced their disapproval on his extremist war on illegal drugs should not be used by him to drive a wedge towards investors and families of Filipinos who have chosen to live in these nations to give themselves a better future rather than continue to sacrifice and risk their lives working in the country where living conditions still have to improve significantly.

There are still a host of problems that the President had inherited from past administrations which he had yet to solve, and three months is still a short amount of time. But he himself admitted that he is only committed to one thing, and that is to eradicate the drug menace.

If that was the case, he should have been appointed Interior and Local Government secretary rather than be elected President since at least his mandate would have been limited compared to the presidency.

But 16 million Filipinos have voted him to office, and most of them are being mobilized by the Duterte administration as his apologists and defenders, to the detriment of the 84 million Filipinos who didn’t vote for him or boycotted the elections altogether.

In his acceptance speech, President Duterte warned of rough times ahead and spoke how he wanted Filipinos to join him in his campaign for change. Since he is in the driver’s seat, the captain of the ship, it’s sometimes unrealistic to hope that he knows what he’s doing and that these changes he promised will not compromise whatever gains and freedoms we already had just to favor another system that will erode and kill these gains.