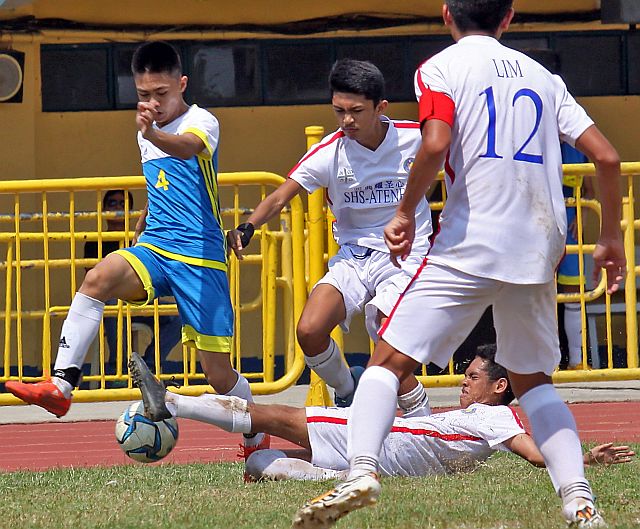 Ventolero nailed his game-winning goal in the fourth minute of the opening half as the defending champion Bosconians recorded their third straight win yesterday at the Cebu City Sports Center (CCSC).

DBTC’s stellar defensive lockdown also played a key role in the crucial victory as it helped hand the Magis Eagles their first loss of the tournament.

SHS-AdC now has a single win, a draw and a loss.

In the other secondary division match, the University of San Jose-Recoletos (USJ-R) hit another brick wall after losing to University of Southern Philippines-Foundation (USP-F), 0-15. USP-F improved its record to two wins and a draw while USJ-R suffered its third straight loss in the tournament.

Today’s secondary schedule pit DBTC against USP-F in the first match at 8 a.m. to be followed by the USC-BED vs. SHS-AdC battle.

Meanwhile, in the collegiate division, the University of San Carlos (USC) defeated USJ-R, 4-1, to improve its record to two wins and a single draw.

JM Kwan initiated USC’s scoring spree when he found the back of the net in the fourth minute while Mark Niñolas made it, 2-0 with his 20th minute goal. Paolo Saguin made it 3-0 for USC when he scored in the 30th minute.

USJ-R now has a single win along with two losses and a draw.