City to turn over aerial ladder truck to BFP 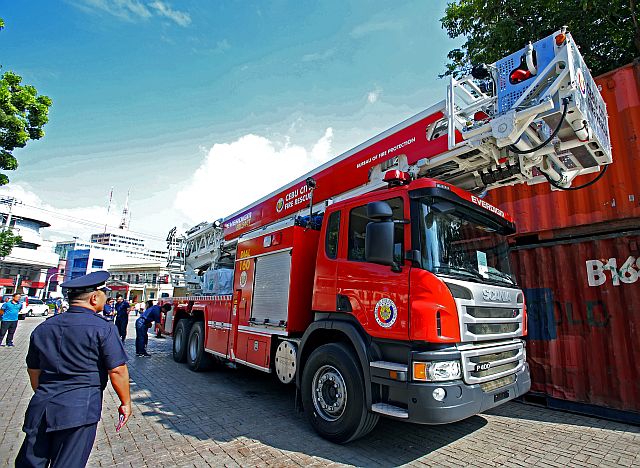 Not being able to respond to fires or emergencies in high-rise buildings will soon be a thing of the past in Cebu City.

The city government has now an aerial ladder truck that they can use in rescue operations in building that is 18 stories high.

The equipment, which was purchased by the city at P57 million, will be turned over to the Bureau of Fire Protection (BFP) on Thursday, according to Cebu City Disaster Risk Reduction and Management Office (CCDRRMO) head Nagiel Bañacia.

“It will be assigned to the BFP. We will have a MOA between the city and BFP. There will be personnel from BFP who will be trained to operate the equipment and engineers from city hall to handle the maintenance. You have to maintain that one, the government is good at purchasing, but inefficient in maintenance. That’s a fact,” he told reporters yesterday.

The equipment was tested at the Plaza Sugbo grounds in front of City Hall yesterday morning after the flag raising ceremony.

Bañacia said the Korean supplier of the equipment will be conducting a five-day training for some city hall and BFP personnel.

After which, Bañacia said there should also be simulation trainings on the use of equipment since it’s difficult to maneuver especially with the presence of overhead and dangling wires in almost all parts of the city.

However, while the equipment can easily reach skyscrapers, it doesn’t have a built-in water tank and hoses to spray water in case of fire.

Bañacia said it needs the support of another water tanker in terms of putting out fire – one that is capable of pumping the water to high levels.

According to Cebu City Councilor Dave Tumulak, who heads the council’s committee on peace and order, the budget for the purchase of the aerial ladder truck was taken from the city’s annual budget in 2015.

Like Bañacia, Tumulak underscored the need for proper training for personnel who will be assigned to operate and maintain the equipment.

According to General Services Office (GSO) head Rolando Malacora, the equipment is still under the custody of GSO and is being kept in the GSO’s warehouse in the South Road Properties (SRP) pending the MOA signing and formal turnover.