MSMEs should learn to be disaster resilient — DTI 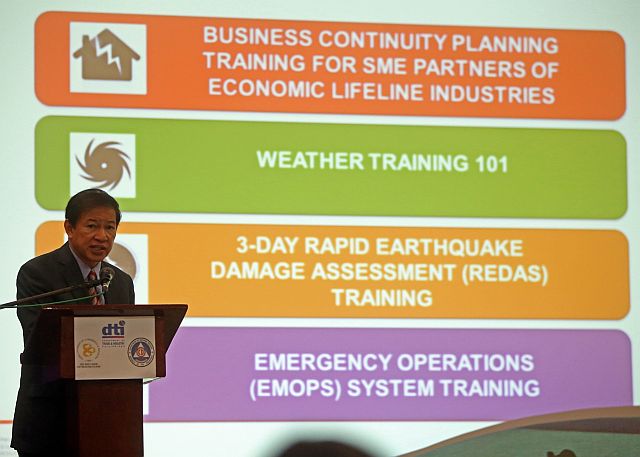 Rene Meily, president of the Philippine Disaster Resilience Foundation, emphasizes during a forum in Cebu City the importance of small businesses having disaster resilience plans so that they can quickly recover from calamities (CDN PHOTO/LITO TECSON).

The Department of Trade and Industry (DTI) has called for strengthened disaster resilience among micro, small, and medium-size enterprises (MSMEs) through an enhanced partnership between the government and private sectors.

Jerry Clavesillas, director of DTI’s Bureau of SME Development, said the agency’s thrust is to promote MSME development and make everyone disaster-resilient.

“We have to be self-reliant as far as (disaster) resilience is concerned,” he said during the “Visayas Business Forum on SME Development and Disaster Resilience in the Philippines” held at the City Sports Club Cebu on Monday.

During the forum, DTI and the Office of Civil Defense in Central Visayas (OCD-7) as well as the Cebu Chamber of Commerce and Industry (CCCI) signed a partnership agreement to support the development and implementation of policies, strategies, programs, and activities necessary to carry out a road map for SME Disaster Resilience.

DTI-7 Director Asteria Caberte said she was hoping that this would serve as a framework to link government agencies, private sector organizations, and other partners to institutionalize mechanisms for helping SMEs prepare for and recover from disasters.

Among the initiatives of DTI following supertyphoon Yolanda (Haiyan) in 2013 was the establishment of Business Assistance Centers in disaster-ravaged areas in the Visayas.

Typhoon-affected entrepreneurs were also able to avail of livelihood training as well as business continuity management workshops, where they were taught how to cope when their enterprises are hit by disasters.

CCCI president Melanie Ng admitted that businesses in the Visayas were not amply prepared when supertyphoon Yolanda hit the region three years ago, but Monday’s event was aimed to ensure that that this would no longer hold true moving forward.

According to the United Nations Office for Disaster Risk Reduction, the Asia-Pacific region has been host to more than half of the world’s most intense natural disasters in the last four decades.

Specifically, the Philippines ranks fourth in the world with the highest number of disasters each year and is among the top 10 countries with the most number of people affected.

Citing the report, Ng said those who are mostly affected by natural disasters are MSMEs since they are resource-dependent and are less resilient.

MSMEs had been found to be more vulnerable than large enterprises since they had limited coping mechanisms, she said.

This means they have limited disaster insurance, limited access to credit, and they don’t have plans for emergency or disaster preparedness for business continuity.

“We formed this agreement to further this public-private solidarity to equip MSMEs with knowledge, strategies, and capabilities of reducing risks and increasing resilience to natural disasters,” said Ng.

Ng said one could only see the adverse consequences of disasters to the capital supply chains, product markets, and labor force of MSMEs.

He emphasized the need to increase awareness among MSMEs to establish their own disaster resilience plans so they could bounce back quickly from calamities.

Read Next
No BPO has left the country, says trade dep’t