Kalag-kalag: When the old meets the new 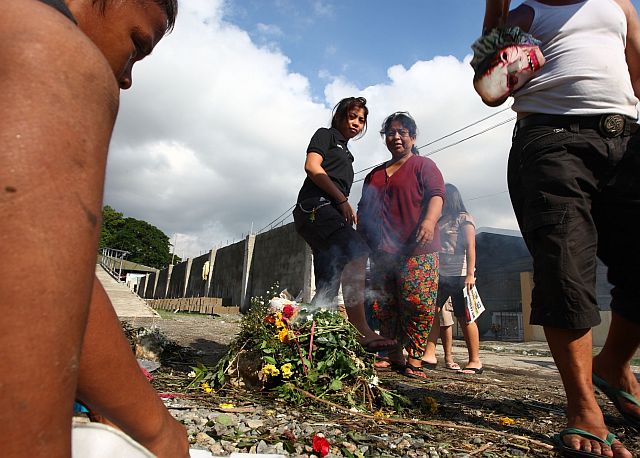 PALINA/NOV 2,2010: Catholics “Palina” after they visited their dead love one at the Carreta Cemetery as they celebrate All Souls Day (CDN PHOTO/TONEE DESPOJO).

The first week of November always holds a special place for old practices, superstitions, and age-old Filipino traditions to flourish.

People visit the graves of their dearly departed, send a prayer to those who have passed on, and families gather for a day or two of simple celebrations.

Many others go home to the provinces.

“All Souls’ Day” and “All Saints’ Day”, collectively referred to by locals as kalag-kalag, have always been a time for people to reconnect as they pass by each other in the cemetery on their way to visit the graves of loved ones or to attend Mass for the souls of the departed.

But for 104-year-old Maria Ochia, kalag-kalag is also the time when the dead reconnects with the living.

To welcome the souls in their brief sojourn into the earthly world, Lola Maria said that it has been her family’s tradition to lay out an array of food in front of the altar all throughout the day and spread grains of uncooked rice on the floor.

Although she has never seen the “ghosts” or “spirits” of her ancestors, she says that she has always felt their presence at one time or another.

The souls’ visit on the day the living celebrates the dead, she said, can be felt by the appearance of “prints” on the grains of rice left scattered on the floor.
“Dili sila magpakita pero duna jud sila’y espiritu. Manimaho sila (We don’t see them but there are spirits. We can smell them),” she said.

For 63-year-old Nang Inday, the days of All Saints’ Day and All Souls’ Day have always been wrapped in traditions that the young may not find all that significant now — such as having Mass said in honor of the dead, lighting candles at their gravesite, and taking it slow in observance of the sacred days.

Nang Inday recalls many beliefs that she has held all through her life. Whether true or not, she says, it is always better to be safe than sorry.

For instance, she believes that people may be accompanied by evil spirits after visiting the dead. Passing through “smoke” from burning newly cut grass or having someone throw ash at their feet before going back home gets rid of the bad spirits, she said.

“Mao na’y mga pagtuo sauna para dili lagi daw mokuyog sila ig sulod sa balay (That’s an old tradition so that evil spirits don’t accompany you home),” she said.
Nang Inday also believes that unless you had ash thrown at your feet before entering the house, you should never go near babies.

“Kay kung dili ka itsahan og abo unya muduol ka sa bata ig sulod sa balay, magsige og hilak ang bata. Di na makatulog (Because if they don’t throw ash at you before entering the house and you go near a baby, it will not stop crying and won’t go to sleep),” she said.

Despite their cultural significance, these old practices are slowly being uprooted from their place of belief as millennials, skeptics, realists, science-junkies, non-believers, and what nots — take over the old ways.

For graphic artist Aaron Alfeche, 23, kalag-kalag is “pure superstition, seemingly benign but is in truth downright ignorant and silly.”

“It is wishful thinking through and through,” he told Cebu Daily News.

“It tries to give false comfort and consolation to humanities’ greatest fears and insecurities — first, being the fear of death; second, that we are indeed alone and that there is no divine supervisor. It claims to know what happens after death, and ridiculously so, that the dead would get together in some theme park,” Alfeche said.

But not all millennials share the same radical view, as others still practice old traditions but with a somewhat modern twist.

A 23-year-old barista, Mat, will be attending his first kalag-kalag this year, having grown up in the United States.

He is actually looking forward to seeing this part of Filipino culture.

“I’d say I am for it and find it interesting as a way of paying respect to loved ones and past souls,” Mat said.

Tech geek, Arch, likewise finds the observance of kalag-kalag as a good way to bond with family and old friends.

“It is a good tradition and a great time to catch up and bond with others, reminiscing the past and all. Besides, I think we only have Christmas and kalag-kalag to get together after a whole year of work,” he said.

Though somewhat taking a more liberal approach to paying respect to the dead, 25-year-old young professional, Marion, believes that the celebration is still relevant today; however, “there is really no need to visit the graves,” he said.

“Remembering your departed loved ones everyday is much better than visiting them once a year just because it’s All Souls’ Day or All Saints’ Day,” said Marion.

For 31-year-old Anthony Rhey Ramirez, the significance of kalag-kalag lies not in its religious implications but in how it manages to bring families together, a distinctly Filipino tradition.

“As a Christian, it’s no longer relevant for me; but being raised in a Filipino culture, we have close family ties,” he said.

“It is the time of year to be with family and visit our departed loved ones. If you haven’t visited the departed for a long time, maybe you can take this opportunity to do so and bond with the family,” Anthony added.

For fresh graduate Katrina Ang, 20, the celebration still makes a lot of sense.
Although she has her reservations as to how the practices came about, it is still one of the few days in the year when she and her family get to celebrate the memories of their loved ones.

“Body ra nang naa sa grave (It’s just the body buried in the grave), but it’s a way of paying respect and remembering them,” she said.

Meanwhile, with all the hype on Halloween, 23-year-old law student Nina Bea Cardona said that she is not one of those into Halloween parties.

“Growing up in a religious family, I value All Souls’ Day and All Saints’ Day as holy days,” she explained.

“It is important that during those days, we go to church to attend Mass and pray for the souls of our loved ones. During those days, people go home to their provinces to visit the cemetery. But for me, praying for their souls and attending Mass are enough.”

As millennials express different views on kalag-kalag, old practices have to fight for their place in a world that is rapidly changing, at a time when people tend to believe only the things that can be explained.

Millennials still believe in family traditions of getting together to pay respect to the dead but in a more liberal and forgiving landscape.

Unlike the old generation who believes that acquiescence to long-held beliefs is a must, the young are faced with two choices: to live with the old just as they had actually lived or to respect the old in a way that is reflective of the times.

The new generation is embracing a shift, not just in how people prefer to live their lives; but also on how they prefer to treat their dead.

In the words of Greek philosopher, Heraclitus, “change is the only constant in life.”

Though at some point, this may mean the dying of traditions as the new replaces the old, it is basically just time taking its course, of reality doing what it is supposed to do, and of history writing itself.

Read Next
Getting ready for All Souls’ Day