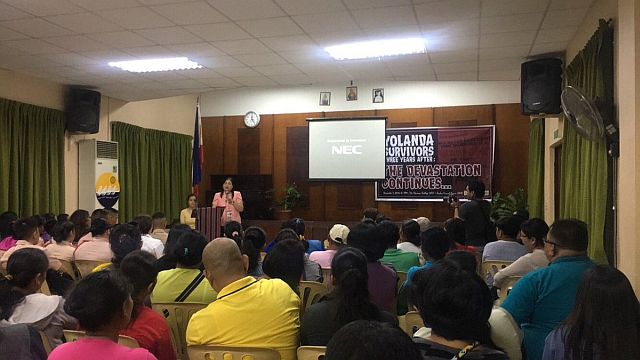 IN time for the third anniversary of Super Typhoon Yolanda that wreaked havoc in the country, a forum was held to highlight the current plight of Yolanda survivors, who are still struggling to recover from the effects of the calamity.

“We call it ‘The Devastation Continues’ because the very big issue here is that certain communities are going to be relocated due to the no-build zone policy,” said Kristina Muñoz, executive director of Cernet.

Muñoz explained that the “no-build zone” policy prohibits the building of structures within the 40-meter easement from the shoreline as this is considered a dangerous area when calamities strike.

However, Muñoz said that Yolanda survivors who will be affected by the policy are crying foul because  no public consultation has been made in connection with the policy.

“The problem is there was no consultation done with the people in drafting this solution,” Muñoz pointed out.

“The people said they have been there for generations. If they are relocated, they were fishermen, so they are also poor, wala sila’y education so they have nothing gyud if they would be taken out of their communities. That’s why they do not want this policy to be implemented,” Muñoz said.

Under Joint Memorandum Circular 2014-1 signed by the Department of Environment and Natural Resources, Department of Interior and Local Government, Department of National Defense, Department of Public Works and Highways, and Department of Science and Technology, the “no-build zone” has been defined as an area where no structures could be built or that nobody could live within it.

However, Muñoz pointed out that under the amended policy, structures can be built within the “no-build zone” if the government declares it as “good for the economy.”

Muñoz cited an example as shared by the fisherfolk organization in Mambacayao and Panagatan.

“The mayor of Bantayan Island told them that they are going to make it into an eco-tourism. The island will be developed into an eco-tourism so for the fisherfolks, for them, they feel that the LGU is using this no-build zone policy to evict them so that they could construct resorts.”

In light of these issues faced by Yolanda survivors, Muñoz urged local government units to first consult the people in the community “before implementing projects that are not beneficial to them” and that they should listen to the people as they are their constituents.