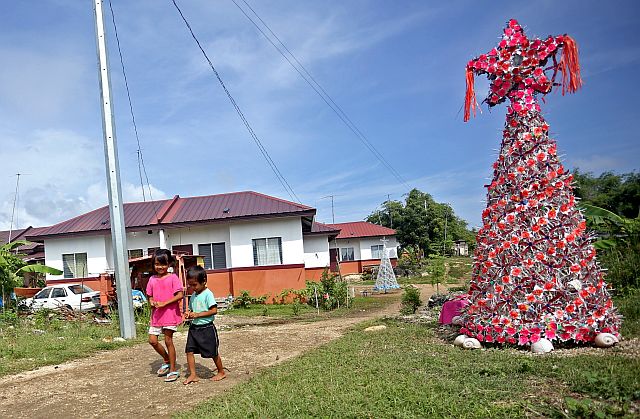 Three years after one of the strongest storms ever recorded in the planet smashed into the Philippines on November 8, 2013, thousands of victims of Super Typhoon Yolanda in Northern Cebu would still be without a decent home, were it not for the efforts of non-government organizations (NGOs).

Settlements built by the private sector have somewhat become a familiar sight to people visiting Yolanda-ravaged areas, north of Cebu, and a testament of national government’s failure to address the victims’ need for housing.

National Economic Development Authority (NEDA) 7 director Efren Carreon confirmed that the National Housing Authority (NHA) has not completed a single project in the region for the past three years.
Out of NHA’s 31 resettlement projects for Central Visayas, amounting to P6.57 billion, only four were on-going as of September this year, Carreon said.

“No resettlement projects were completed. But confident ta nga kaning (but we are confident that this) four projects will be completed anytime this year,” Carreon added.

The lack of land titles in areas where NHA planned to build new homes, was seen as a major setback.

In the 5th class municipality of Tudela, Camotes Island, some 34 nautical miles from Cebu City, Mayor Erwin Yu said that several Yolanda victims had not been extended any housing assistance because lots had not been titled.

“I don’t know who’s to blame why until now there are still lands in our town which do not have titles,” Yu said.

In the town of Daanbantayan, Mayor Vicente Loot noted that government’s Emergency Shelter Assistance (ESA) for Yolanda victims had yet to be implemented three years after the powerful storm made landfall with monstrous winds spinning across the northern area.

“We are still trying to straighten out some issues concerning the ESA. The money amounting to P28 million was returned by the former administration to DSWD,” Loot said.

“Daghan pa ang naghilak kay hangtod karon wala pa sila ka dawat (A lot of people are crying because until now, they have not gotten their assistance),” the mayor added.

According to Loot, around 2,000 households in Daanbantayan, all identified victims of Yolanda, still had to receive government financial assistance.

A report from the Provincial Disaster Risk Reduction Management Office (PDRRMO) listed a total of 152,746 families affected and 610,984 individuals displaced; while the number of houses affected was recorded at 122,482 with 75,701 or 62 percent destroyed and 46,781 or 38 percent partially damaged.

Most of the damaged houses were located in Daanbantayan town and Bantayan Island, which took the hardest beating in Cebu as powerful winds of 250 kph roared ashore.

In Bantayan Island, displaced fisher folk now make a living away from the sea.

In Barangay Sillon, located in the island’s capital town of Bantayan,

75 families living in danger zones were relocated to the upper portion of the village, some two kilometers away from the seashore.

While some still fish to earn a living, walking 15 to 20 minutes a day to get to the sea, others had shifted to another form of livelihood: crushing stone, manually.

Despite difficulty in having ends meet, Libre said that her family was still grateful that they were among Yolanda victims given a house by non-government agencies.

Built by the Islamic Relief Worldwide, a non-government organization (NGO), Libre’s house is made out of concrete and wood.

The houses in Sillon were turned over to families by the NGO in July 2014, nearly a year after the super typhoon struck.

For Leonarda Esparcia of Barangay Maricaban in the town of Sta. Fe, the island’s tourist capital, life has drastically changed three years after Yolanda.

Esparcia, 43, and her husband Alfredo, 39, were among 218 families in barangays Maricaban and Tabunok who were given a house by the NGO, Habitat for Humanity Philippines, in a small community called Habitant Sta. Fe Ville built for Yolanda victims.

Adela Gerodiaz, 51, lived in a tent for two years before moving into Habitant Sta. Fe Ville just last year with her husband and son.

No one came for them

In the islet of Lipayran, off the coast of Bantayan town, residents are grateful for NGOs that have sought them out despite the distance.

Reached after an hour-and-a-half boat ride from the main island of Bantayan, Lipayran felt abandoned, days after the storm struck in 2013, as aid came in trickles.

But three years after the monster storm, Lipayran residents still have to feel the hand of government.

Eileen Gulisao, a resident of sitio Mambacayao Daku, Lipayran, said that aside from the initial food packs given by the Social Welfare Department, they could not recall a visit by national government agencies to check on how they were ever since Yolanda.

About 400 residents in the sitio depend on fishing for a living.

While government aid failed to reach them, she thanked private sector donors like the Ramon Aboitiz Foundation Inc. (RAFI) and Heart Anonymous, an NGO from Negros province that was quick to respond to their needs by giving them tents, housing materials and food packs.

The reason, he said, why the sitio was chosen as the pilot area for the Provincial Capitol’s integrated development program in Bantayan town.

According to Tribunalo, the program which covers sanitation, livelihood and anti-illegal fishing efforts will help develop a community-based tourism program in the area for it’s socioeconomic development.

“The reason why we came here in Mambacayao Dako is also because we feel that we still have lots of gaps in terms of recovery and rehabilitation after the Yolanda destruction,” Tribunalo said.
But Lipayran isn’t the only place still reeling from the effects of Yolanda that plowed across northern Cebu.

In Sta. Fe, around 2,000 households targeted as beneficiaries of a national government resettlement program have yet to receive any help from the National Housing Authority, said Sta. Fe Mayor Jose Esgana.

With the snail paced efforts of national agencies, residents like Jocelyn Javier, 40, may have to wait another day for help to come.

Or perhaps, another year.

“Nangalagpot among mga bongbong ug atop. Pero wa gyud mi hatagi dinhi. Way naabot. Mura man mi ug wa tagda, (Our roofs and walls were all blown away but no help came. No one seems to care),” she said harboring the pain of government neglect.

Read Next
Pagasa Mactan soon to have own data center