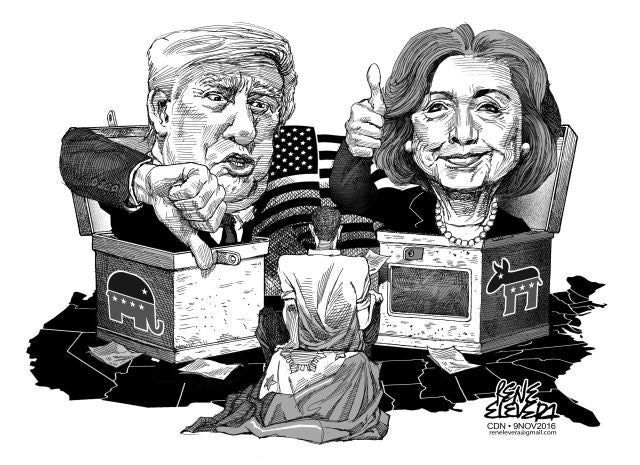 By the time this piece sees print, the US would have voted into office either Democrat standard-bearer Hillary Rodham Clinton or Republican presidential nominee Donald Trump, and the election of one or the other would have major ramifications on the world stage.

The latest surveys have Clinton clinging to a single-digit lead over Trump, the brash and controversial businessman and reality TV host who steamrolled over political heavyweights to win the Republican party nomination.

The single-digit lead stemmed from the FBI investigation into her e-mails which somehow made their way to WikiLeaks and included a startling exposé on the possible connivance between some top CNN officials and one of its former contributors who now works in the Clinton campaign staff in giving her advance copies of the questions to be posed in one of the network’s sponsored town hall debates.

But it’s not just the e-mails that had Clinton questioned about her failure to secure sensitive private communications. During her husband’s run and his eventual presidency, they were hounded by the so-called Whitewater scandal that resulted in the suicide of one of their top aides.

Speaking of past scandals, Trump had his share of them too, and the latest was an interview with an MTV host that had the Republican front-runner boasting about his sexual exploits which caused some women to accuse him of sexual harassment.

And let’s not forget about how he started the so-called “junk bonds” trend that made him into a billionaire and how it all blew up in his face when the banks started calling for the payments which caused some of his companies to declare bankruptcy and close shop.

Oh, and he also encountered some controversy over his unwillingness to declare his tax returns. Both candidates carry political baggage that may or may not convince Americans to vote against either of them.

The selection of either one of them would impact on how the US deals with the country which is now led by ill-tempered President Rodrigo Duterte. Should Trump win, the Philippine business community would have sufficient cause for worry over the real possibility of American investors pulling out owing to Trump’s known abrasiveness and bigotry over foreigners like Mexicans and Filipinos.

If Clinton wins, it would be interesting how she would deal with President Duterte, who spends his time railing against the US and its past sins towards the country whenever its government questions him on his war against illegal drugs.

Whoever wins would certainly create an impact on the way America does business with the Philippines and the rest of the world. As a nation that had some of its citizens immigrating to the US and made it their home, we also have a stake in this year’s US elections.

Read Next
The courts