No funds for Yolanda rehab in 2017 budget, says Recto 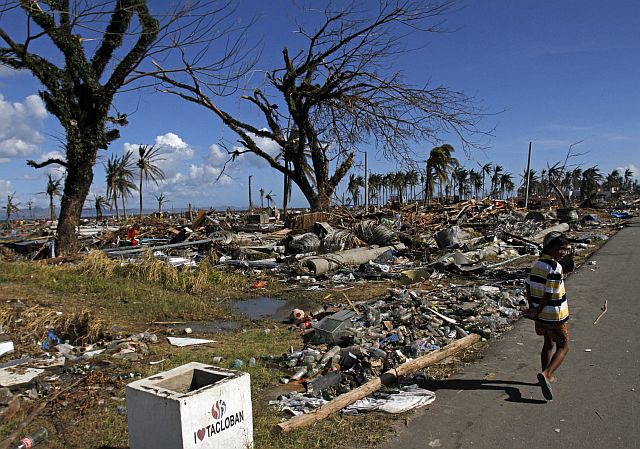 Houses made of light materials are totally wiped out by supertyphoon Yolanda in San Jose area, Tacloban City, in this Nov. 15, 2013 file photo (INQUIRER).

SENATE Minority Leader Ralph Recto on Friday noted the lack of explicit allocations for the rehabilitation of areas devastated by supertyphoon Yolanda in the Visayas three years ago, calling for an “itemization” of related projects under the P37.2-billion calamity fund in the 2017 national budget.

In a statement, Recto said the allocated National Disaster Risk Reduction and Management Fund (NDRRMF) “does not earmark any amount for Yolanda rehabilitation despite the huge backlog in deliverables.”

In contrast, the current year’s NDRRMF allocated P18.9 billion for rehabilitation efforts in areas struck by the monster storm in 2013.

“There is still much work to be done in Eastern Visayas, but the calamity fund is silent on the rehabilitation deficit, which must be funded,” Recto said.

The lack of a specific “Yolanda earmark” for next year “might be misinterpreted that government has ceased funding the repair of public properties” destroyed by the strongest typhoon in recorded history,” Recto said.

“If reconstruction is still a work in progress, then such must be reflected in the calamity fund to reassure Yolanda victims that what government had promised will be still be redeemed, “ Recto said.

He said a general provision for Yolanda-related rehabilitation projects listing specific amounts allocated to recipient agencies should at least be included in the 2017 budget.