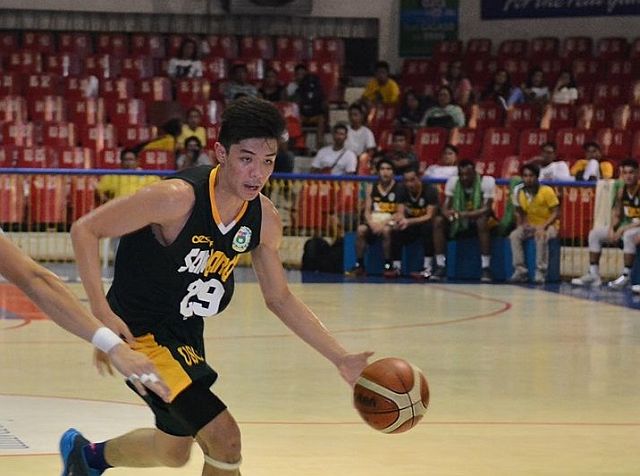 University of San Carlos’ (USC) Mythical Five forward Conrad Catapusan is getting the full-court press from Adamson as the Soaring Falcons are intent on recruiting the talented youngster to their budding squad.

After watching the 6-foot-2 forward from Liloan shine during the tryouts Adamson coaches hosted last week, Falcons assistant coach Awoo Lacson is convinced that Catapusan can play a huge part in the Soaring Falcons’ future.

“We have already relayed our intentions to head coach Rommel Rasmo, Mayor Junie Martinez and Perry Lim,” said Lacson, who came to Cebu along with fellow assistant Tonichi Yturri for the two-day tryouts last Thursday and Friday.

Impressed with what he saw from Catapusan during the tryouts, Lacson immediately gave Adamson head coach Franz Pumaren a call as well as a video of the latter’s play during a scrimmage. Lacson said they have already invited Catapusan to go to Manila in order for him to show off his skillset before Pumaren.

The 18-year-old Catapusan was also intrigued by the idea of joining the Falcons and showcasing his talent on the national stage. However, he is still awaiting word from USC management regarding this development.

(They want me to go to Manila but I’m waiting for San Carlos because [they] promised me something. I’m just waiting for them [to make a decision] because I really want to finish my schooling in USC.)

In a separate interview, Rasmo said that he would love to have Catapusan for one more year as he believes that the latter needs more experience, both on and off the court, before plunging headlong into Manila.

“The things he did as a rookie this season? Imagine what he can do with more experience in his second year,” said Rasmo, considered to be a great judge of talent after having seen several of his Ateneo de Cebu Magis Eagles go off to playing in various schools both in the UAAP and the NCAA.