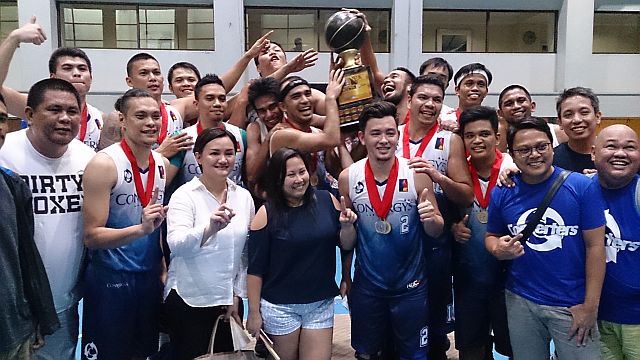 Members of the Convergys Converters celebrate their championship victory in the Elite Classic division (CONTRIBUTED).

THE CONVERGYS Converters are champions for the second straight year, while the Supportsave Dragons completed an equally impressive feat as the two teams swept their respective best-of-three title series last Sunday in the 12th City Sports Club-Cebu (CSC-C) E-League for Basketball at the CSC-C Gym.

The Converters defended their Elite Classic crown by disposing of the Lexmark Stallions, 58-51, while the Dragons made history in bagging the EVO League title via an 89-73 dumping of the Tech Mahindra Tech Mighties.

Franz Dysam was the third Converter in double figures as he finished with 10 markers, six assists, three steals and a rebound and went to win the Finals MVP award.

The Dragons, on the other hand, completed a perfect run to become the first team in league history to win a title without tasting a single defeat.

Niño Belande showed why he is the EVO League MVP as he fired 23 points while adding six boards, five steals and three assists, helping the Dragoons finish the season with an impressive 16-0 (win-loss) record.

The brilliant all-around game allowed Belande to go home with another accolade as he was named the Finals MVP.

Belande got ample support from Edmon Paradiang, Janille Kristianne Bantilan and Germaine Jo Guarisma, who cashed in 16, 12 and 11, respectively.

EJ Saavedra led the way for the Tech Mighties with 24 points.