SEND MARCOS BACK TO ILOCOS 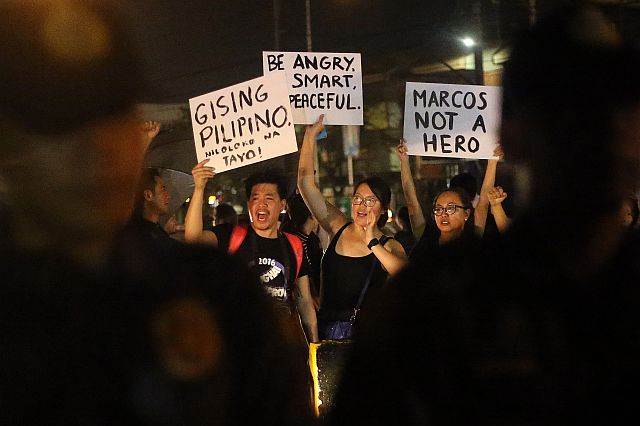 Protesters continue their rallies at the People Power Monument in Quezon City against the Marcos burial at the Libingan ng mga Bayani (INQUIRER PHOTO).

The furor over the “surprise” burial of strongman Ferdinand Marcos at the Libingan ng mga Bayani is far from over.

Youth, anti-Marcos groups and Martial Law survivors in Cebu yesterday vowed that Friday’s protests were not going to be a one-day affair, as they have lined up several activities by next week.

The Cebu Citizens Assembly, a coalition of 22 groups that include militants, non-government and civil organization, said there will be no let up in their series of protest activities unless Marcos will be exhumed and buried in Ilocos Norte.

Toedy Navea, secretary general of Sanlakas, said they will not stop by just asking President Rodrigo Duterte to order the return of the Marcos remains to Ilocos Norte but they will also discusspossible petition and charges to be filed against the people behind Marcos’ burial at the LNMB.

“We will consider legal options and talk how we will mobilize our lawyers for possible petition,” said Navea.

The group also plans to erect two markers at the Plaza Independencia on Nov. 26, one representing the nine Supreme Court (SC) justices who voted to allow the Marcos burial at the LNMB, and the other for Marcos himself.

“The marker for the SC justices will remind the people what they have done to our justice system as they insulted the Martial Law victims,” Navea said.
The marker will bear the names of the nine magistrates — Associate Justices Arturo Brion, Presbitero Velasco Jr, Diosdado Peralta, Lucas Bersamin, Mariano del Castillo, Jose Perez, Teresita de Castro, Jose Mendoza and Estela Perlas-Bernabe, he said.

The second marker intended for Marcos will read “Marcos is not a hero.”
The two markers will be placed beside the human right’s marker, a memorial for victims of the Martial Law regime.

Myles Albasin, an officer of Anakbayan Youth-Cebu, said they will join all nationwide protest actions that will be undertaken by the youth group as a means to call out on President Duterte to reconsider his decision that enabled the Marcos family to bury the dictator at the LNMB.

“There’s still no specific date (but in Cebu City) we will be mobilizing everyone and we encourage them, especially the youth, to remain vigilant and be aware of the atrocities during the Martial Law era,” Albasin said in Cebuano.

A business leader in Cebu, however, has a different position on the Marcos burial, calling on the public to “bury the issue and move forward.”
Mandaue Chamber of Commerce and Industry (MCCI) president Glenn Soco said while he believed it was time to “move on,” it should not stop those parties against the LNMB burial to continue pursuing their legal remedies.

“But in the end, we have to follow the rule of law,” he told CDN in a text message.

For Federico Escalona, executive director of the Philippine Exporters Confederation (Philexport) in Cebu, even as the public would continue to heatedly discuss the morality propriety of Marcos’ burial at the heroes cemetery, the SC has already decided the matter and should be respected.

But Senate President Aquilino “Koko” Pimentel III said on Saturday that the rushed burial of the late dictator at the Libingan can still be undone, even as it is not likely during the term of President Duterte.

“Of course, this being a political issue, let us not lose hope, because this can be reversed anytime,” said Pimentel.

It was Mr. Duterte, whose father Vicente served in the Marcos Cabinet, who had allowed the late dictator’s interment at the LNMB.

Pimentel, who heads the President’s party, said he is not keen to raise the matter again to Mr. Duterte as Marcos has already been buried.

But he said, Mr. Duterte could still have a “change of heart.” Or else, the next President could undo the burial.

“Then by 2022, when we have a new President and he believes that there are disqualified persons buried in the Libingan ng mga Bayani, then he can order their transfer, or their removal,” he told the Inquirer when reached by phone.

Pimentel said the Commission on Audit (COA) may also “disallow all expenses connect with the burial once it reviews the transactions” of the Armed Forces of the Philippines (AFP), which was tasked to make the funeral arrangements.

Such disallowance would compel the military to “justify, explain or return the sum spent.”

“If it was allowed, then what was done must be reversed,” Pimentel said.
The senator noted that the state has remaining claims of money from the Marcoses, who are known to have amassed stolen wealth of about $5 billion to $10 billion.

“They owe the state a huge debt, and yet the state even gave them a favor,” he said.

“This is not because of the legal (aspect). It is because a benefit is given to a person or his family against which the government has financial claim, which has not been returned and/or repaid,” he continued.

The issue of Marcos’ burial also prompted Pimentel to file a measure that would set aside land within the LNMB for the burial of “Filipinos of historical interest,” separate from plots reserved for the military.

This area, per his proposal, shall be called Libingan ng mga Makasaysayang Pilipino, where former presidents of the Philippines, statesmen, dignitaries, and national artists and scientists may be interred.

Creating such delineation would “preserve the LNMB as a military memorial consistent with the purpose intended” when it was established in 1947, he said.

As protests continued over the burial, Pimentel said Filipinos should continue exercising their constitutional rights and take the time for some reflection on how much we value lessons of history.

“This will strengthen our democracy. This will also show the people that the Philippines has a lot of problems, this is one of them but this is not the only one. So, therefore, this will also prompt us to value our time, value our priorities,” Pimentel said.

“Let us allow all of these exercises to happen and then we will learn some lessons, and we will be a better democracy, a stronger country and a more historically conscious people because of all of these developments,” he said.

Read Next
Dingdong Dantes: The man behind the hood