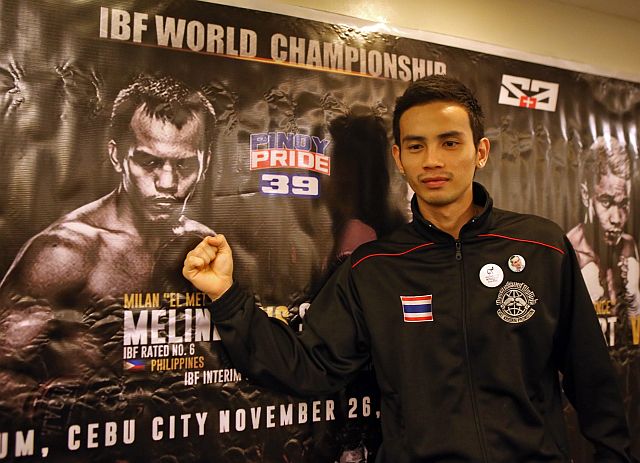 Fahlan Sakkreerin of Thailand stands in front a poster of Milan “El Metodico” Melindo during a press conference at the St. Mark Hotel for the Pinoy Pride 39. Both square off this Saturday at the Cebu Coliseum. (CDN PHOTO/LITO TECSON)

Former world title challenger Fahlan Sakkreerin of Thailand kept it low when he talked about his fight against Milan “El Metodico” Melindo of the Philippines yesterday in a press conference for the upcoming Pinoy Pride 39: IBF World Championships.

Both will fight in the main event this Saturday night at the Cebu Coliseum. At stake is the IBF interim world junior flyweight title.

Sakkreerin, who sports a 31-4-1 (win-loss-draw) record with 16 knockouts, arrived in Cebu Monday evening along with his entourage headed by his English trainer Rian Munton. They appeared in a press conference yesterday at the Saint Mark Hotel.

While most expected tough statements from the boxer, the Thai showed off a softer side and instead wished Melindo the best. But don’t expect him to be soft inside the ring.

“I will do my best for the boxing fans who will watch the fight,” he said. “I promise everyone that it’s going to be a good fight.”

Munton said they have already formulated a perfect game plan to beat the ALA Boxing Gym stalwart Melindo, who has a 34-2-0 12 KOs record.
Pressure on Melindo

“We had a very good preparation for this fight. We have different techniques and had a beautiful training camp full with sparring. We also studied Melindo’s style,” said Munton. “We prepared our best for this fight. We will make adjustments as the fight goes on. Melindo has his own weaknesses but I won’t highlight that because we respect him. Melindo’s a good technical boxer. All we can promise is a good fight.”

Munton said his ward can fight Melindo technically or in a slugfest, which puts his boxer in a better situation.

“The pressure is on Milendo because everyone’s expecting him to win a world title while Fahlan can fight him by a distance or close range,” added Munton, who trained Sakkreerin since 2010. “Melindo is a good boxer but Fahlan is younger and fresher and he is not many miles away from Milan’s experience.”

Sakkreerin’s first world title attempt fell short when he got defeated by Japanese IBF Katsunari Takayama for the IBF world minimumweight title last year in Japan. After that loss, Sakkreerin piled up a four straight wins in Thailand.

Read Next
Gary Payton in Cebu for NBA Store opening