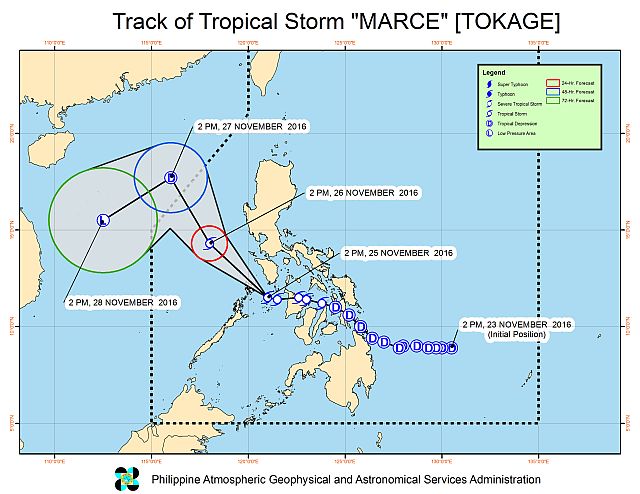 a graph shows the movement of Tropical Storm Marce (PAGASA).

Tropical Storm Marce brought power outages, flooding and damage to crops in northern Cebu, but people were thankful that it did not leave casualties in its wake.

Around 25 families in Sogod town were evacuated when water levels rose after Marce made landfall.

No casualties were reported, but according to Regner, many crops were destroyed.

Anticipating Marce, Regner said that in the eve of Nov 24 the Cebu Electric Cooperative (Cebeco) shut down all the electricity in northern Cebu but the line immediately returned yesterday morning.

According to Lowell Belciña, Cebeco 2 General Manager, many electrical posts were leaning because of strong winds, especially in Daanbantayan, Bogo City and San Remigio.

“This resulted to power interruptions in these areas since Thursday evening until Friday morning.

The storm packed maximum sustained winds of up to 65 kilometers per hour near the center and gusts of up to 100 kph, according to the Philippine Atmospheric, Geophysical and Astronomical Services Administration.

Signal No. 2 was raised over the Calamian group of islands, Cuyo Island, southern Occidental Mindoro and southern Oriental Mindoro.

The storm was expected to hit the Calamian islands between 5 and 6 p.m.

The rest of Occidental Mindoro and Oriental Mindoro, northern Palawan and Romblon, Aklan and Antique were placed under Signal No. 1.

Marce was last spotted 55 kilometers southeast of Coron, Palawan, moving west northwest at 22 kph. It is expected to exit the Philippine area of responsibility by Sunday before noon or in the afternoon. 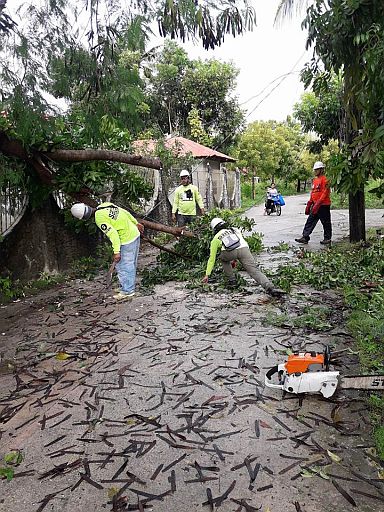 Tropical Storm Marce, as it leaves fallen trees in its wake (PAGASA).

The Philippine Coast Guard (PCG) in Cebu allowed vessels from Cebu to sail yesterday after storm signal warning in the entire Cebu was lifted.

However, PCG was monitoring MV John Paul of 2Go shipping yesterday because Romblon, which was part of the vessel’s route to Manila was placed under storm signal number one.
MV John Paul’s scheduled departure was 9:30 p.m. last night.

In Cebu City, Nagiel Bañacia of the Cebu City Disaster Risk Reduction and Management Office said the Barangay Quick Response Team, especially those in mountain areas, was of help to them in the monitoring operations for tropical depression Marce.

“We’ll respect their (council) decision, however, people are volunteering their services. So who are we to say no?,” asked Bañacia.

He said that the responders could effectively monitor any damage because they are on the field.

“They directly report to us,” he said.

No untoward incidents were reported in Cebu City as a result of the rains brought about by the weather disturbance.

But the public is still advised to take precautions, especially those living in landslide-prone areas.

“Because of rains, there might be landslides later on,” he said.

Bañacia said heavy equipment are on standby in Barangays Guba and Buot should landslides occur.

Read Next
A Step Closer To Becoming Mr. and Ms. South Town Centre 2016