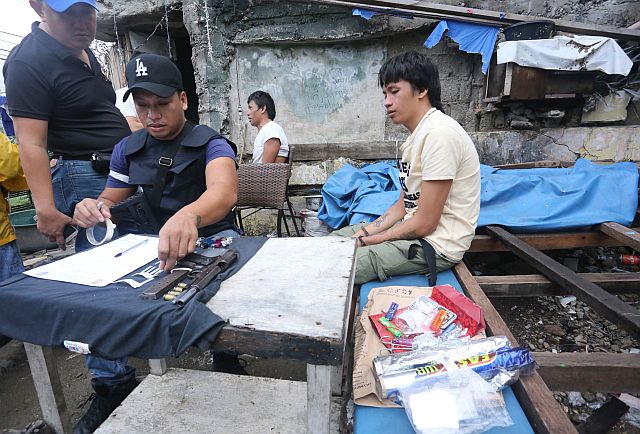 Francis John Villanueva, 21, was arrested with his father, Rewel alias Peheng (background) after they were caught in possession of several grams of shabu and a .45 caliber pistol during a raid in Sitio Sta. Teresita, Barangay Tejero. The two were linked by police to the illegal drug trade of Rewel’s wife, Jocelyn, and her brother Gener Rondina. Jocelyn and Gener are both children of retired SPO4 Generoso Rondina who cries foul over the death of Gener. (CDN PHOTO/LITO TECSON).

Enraged over the death of his son in the hands of police operatives trying to serve a warrant on Friday, a retired police officer joins the voice of several others in crying extrajudicial killing (EJK).

“Sobra ra kaayo ang ilang gibuhat. (What they did to my son was too much),” said SPO4 Generoso Rondina, a retired member of the Philippine National Police (PNP) when he learned that his son, 38-year-old Gener, was killed in a police operation inside the latter’s house in Barangay Carreta, Cebu City, on Friday dawn.
According to Supt. Joie Yape, head of the Regional Anti-Illegal Drugs Special Operations Task Group (RAIDSOTG), Gener engaged police operatives in a shootout.

But SPO4 Rondina told radio DyHP that based on accounts of witnesses, his son yielded to the police but was still shot by the operatives.

As a retired policeman, Rondina said he knew how his fellow operatives worked.

“Gikan naman ko anang trabaho. (I came from that kind of job),” he said.

Rondina was formerly assigned at the Mabolo Police Station in Cebu City before he retired in 2009.

Armed with search warrants issued by Judge Wilfredo Navarro of the Regional Trial Court Branch 19 in Cebu City, operatives of the Regional Special Operations Group (RSOG) and RAIDSOTG went after Gener and his sister, Jocelyn.

While Gener allegedly engaged the operatives in a shootout, Jocelyn, 42, could not be located by the police when operatives barged into her house in Barangay Tejero.

Police arrested Jocelyn’s live-in partner, Rewel Villanueva, and their 21-year-old son Francis John, who were both caught in possession of shabu (methamphetamine).

Seized from Rewel were 33.13 grams of shabu valued at P394,120 and assorted drug paraphernalia, police said.

His son Francis John was reportedly in possession of 31 grams of shabu worth P36,580 and a .45 caliber gun.

Charges for violating Republic Act 9165 or the Comprehensive Dangerous Drugs Act of 2002, particularly for possession of shabu, will be filed against the two suspects before the Cebu City Prosecutor’s Office.

Since the prohibited drugs taken from the suspects weighed over five grams, the offense is non-bailable.

Sought for comment, Rewel denied any involvement in the illegal drugs trade.

“Wala gyud ko ana. (I am not into illegal drugs),” he told reporters at the RSOG office.

Rewel said it was Gener and his son Francis John who peddled illegal drugs.

But his pleas, Rewel said, fell on deaf ears.

Meanwhile, Francis John claimed that the illegal drugs recovered from him were not his.

“Igo ra na nga gibilin sa akoa. (Someone just left it with me),” he said.

Francis John refused to elaborate and did not answer further questions from the media.

As he grieved the death of his son, SPO4 Rondina said he knew about Gener’s illegal drug operations and would have wanted him to surrender to the police.

But he said that he was afraid that Gener might get killed.
“Kahibaw na ko nga kon mo-surrender siya sa Tokhang, patyon lang gihapon siya. (I already know that even if he surrendered during the implementation of the Tokhang, he would still be killed),” Rondina said.

Chief Supt. Noli Taliño, director of the Police Regional Office in Central Visayas (PRO-7), said the police did not have any choice but to shoot Gener during the operation yesterday.

“Based on the report, the suspect engaged the police in a shootout, so our operatives had to fight back,” he said in an interview.

Taliño maintained that when drug suspects placed the lives of the police in danger, the latter should protect themselves by neutralizing the target.

He also belied SPO4 Rodina’s claim that drug surrenderers will still get killed even if they yield to authorities.

“That is a wrong impression. We accommodate all the surrenderers. And if you hear that some of them were killed, perhaps it was because they returned to their old ways and when the police conducted an operation, they shoot it out with the operatives,” he said.

Based on the records of the Police Regional Office in Central Visayas (PRO-7), at least 142 drug suspects were killed in an alleged shootout with policemen in the region since July 1.
Nineteen of them were killed in different operations in Cebu City.

At least 201 other drug suspects were gunned down by still unknown assailants in the region.

Meanwhile, Taliño said they are conducting an investigation to find out from whom drug personalities connected to the group of slain drug lord Jeffrey “Jaguar” Diaz get their supply of shabu now that their leader is dead.

“Nagkawatak-watak na sila. Wala pa tayong information sino ang pumalit kay Jaguar kasi nagkanya-kanya na sila. Kahit saan-saan na lang sila kumukuha ng supply ng drugs. (The group disintegrated after Jaguar was killed. We don’t have any information yet as to who took over the place of Jaguar.
Members of the group have now been getting drugs from different suppliers),” he said, citing intelligence reports.

Diaz, tagged by the police as Central Visayas’ top drug personality, was killed in a police operation in Las Piñas City last June 17.

Taliño said he’s hoping that Lovely Adam Impal, who was identified by Eastern Visayas’ top drug lord Rolando “Kerwin” Espinosa Jr. as among his drug suppliers in Cebu, will eventually squeal on her protectors in the government.

“We want to know who benefited from the drug trade. Jaguar is dead. I hope Lovely can tell us many things about their operation,” he said.