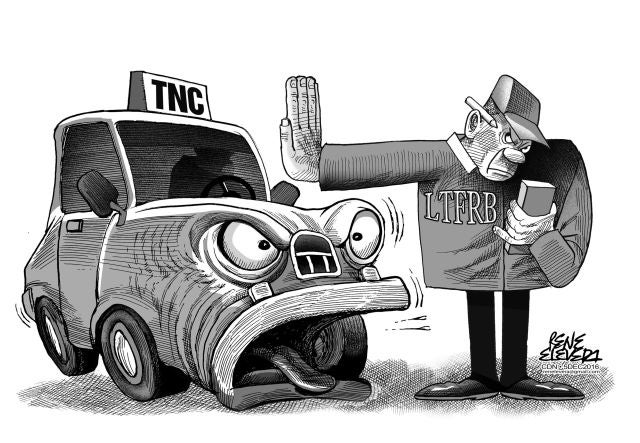 We only hope that Congress immediately gets cracking and resolve the question of how to regulate the transport network companies (TNC) following the recent suspension of their operations by the Land Transportation Franchising and Regulatory Board (LTFRB).

Both regional LTFRB director Ahmed Cuizon and former LTFRB board member Ariel Inchon would support the investigation if only to pave the way for setting up regulations in TNC operations despite the insistence of Uber, one of those affected by the suspension, that it is not a taxi service and should not operate under laws governing taxi operations.

But knowing how Congress operates including its current mission to expose Sen. Leila de Lima’s alleged drug links, it would be a miracle if some sort of resolution would arrive at in this issue.

Which is not only lamentable but disturbing, considering that motorists who operate under Uber can help alleviate the traffic congestion by servicing the commuters unable to flag down taxis for one reason or another.

It had been said that the number of motorists have risen over the years and caused in part of the traffic congestion being suffered by them and commuters alike.

If a substantial portion of these motorists apply for Uber and other transport network companies and offer their vehicles to service these commuters, then it may help reduce the number of people left stranded in the streets and roads waiting for a ride back home.

Alas, the TNCs are suspended owing to a petition from the taxi operators who complained that Uber, Grabcar and U-Hop have eaten away at their livelihood, never mind the fact that some taxi operators and drivers have also applied to Grab Taxi in order to find more customers and supplement their income.

There are still reservations on these transport service companies and it’s not helping their cause if they refuse to submit to some type of government regulation because they, along with the other mass transport operators, also carry the weight of the responsibility to ensure the safety and well-being of their customers.

If we encounter cases of taxi drivers being abusive to or even preying on their customers even if they are being regulated by government, there’s also a good chance that similar cases will occur among transport service networks despite the regulations they enforce and require from their members.

At the same time we cannot ignore the value that their service affords their clients, a good number of whom are satisfied and even continually avail of them even after they were suspended for the meantime by the LTFRB.

If other companies like fastfood outlets, hotels and other commercial businesses operate under government regulation, what’s to exempt Uber and other transport service networks from government oversight? They should allow this since they owe it to the riding public and to themselves.

Read Next
Protecting Environmental Rights and their Defenders