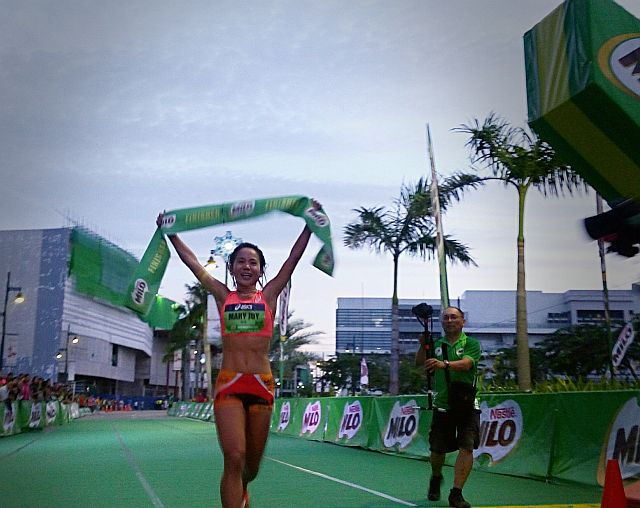 City of Iloilo — Despite all the success she has had this year — which included a stint in the Olympic Games in Rio de Janiero, Brazil, Cebu’s Mary Joy Tabal didn’t think she’d be able to win a fourth straight women’s title in the National Milo Marathon Finals.

But the 27-year-old petite runner from Barangay Guba, Cebu City still achieved the amazing feat, doing it in style as she solidified her status as the country’s Marathon Queen with a record-breaking performance here on Sunday morning.

Tabal, the only Filipina marathoner to compete in the Olympics, topped the all-Filipino women’s race by clocking two hours, 47 minutes and 49 seconds, eclipsing the 2013 Milo Marathon record of 2:48.00, which actually belonged to her.

Tabal also became the first marathoner in the country to win the 42-kilometer race of the annual event for four straight years.

“I did not expect this to happen because I was really worried prior to the race that I might not perform well,” Tabal, who became emotional after crossing the finish line, said. “I trained for this race for just a month because I did a lot of [other] training and races this year from the Boston Marathon, the Scotia Bank Ottawa Marathon in Canada and the Rio Olympics. But I persevered, kept myself focused and believed in what my coach told to me, that I can pull off a winning performance.”

In the open division, which featured foreign runners, Tabal placed second to Elizabeth Romukol, who finished in 2:41.55.

The victory also gave Tabal another shot at the Ottawa Marathon next year together with men’s 42k champion Jeson Agravante of Negros. This is an incentive given to the winners of this prestigious race.