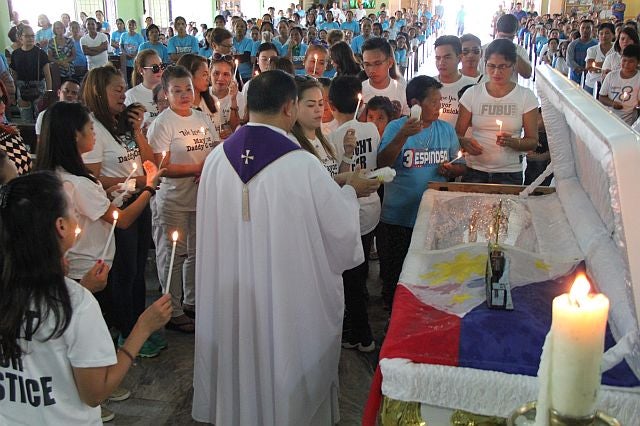 A flag is draped over the white coffin of Albuera Mayor Rolando Espinosa Sr., who was laid to rest today at the town’s Catholic Cemetery. (Photo by Robert Dejon).

ALBUERA, Leyte- Around 1,500 supporters, family and relatives formed a kilometer-long funeral procession that brought the remains of mayor Rolando Espinosa Sr. to his final resting place at the Catholic Cemetery yesterday afternoon.

A poignant aura pervaded the town as the white casket of the 54-year-old mayor was brought out of his house in Barangay Binolho at noon for a requiem mass at the Saint James Parish Church.

The crowd was reminiscent of the funeral of Jeffrey “Jaguar” Diaz which was attended by hundreds of supporters, family and friends.

Diaz, whom police named as a big-time drug lord was killed in an alleged shootout with the police in Las Piñas in June, 2016.

Espinosa was detained inside a sub-provincial jail in Baybay City after drug charges were filed against him. He and his son Kerwin are likewise suspected drug lords.

It was during his detention that a raid by the Criminal Investigation and Detection Group was conducted inside the jail last November 5. He and another inmate were shot several times for allegedly engaging the police operatives in a shootout.

“He was really a good man and always ready to help us his people whenever we came to him for a help,” said Veronica Alajas of Barangay Mahayag.

Alajas, together with other residents of Mahayag, the farthest village of Albuera more than five kilometers away from the town center, rented a vehicle so they could attend the mayor’s funeral.

Alajas said she received financial help from Espinosa, who was not yet the mayor at that time, when they needed to bury a relative. 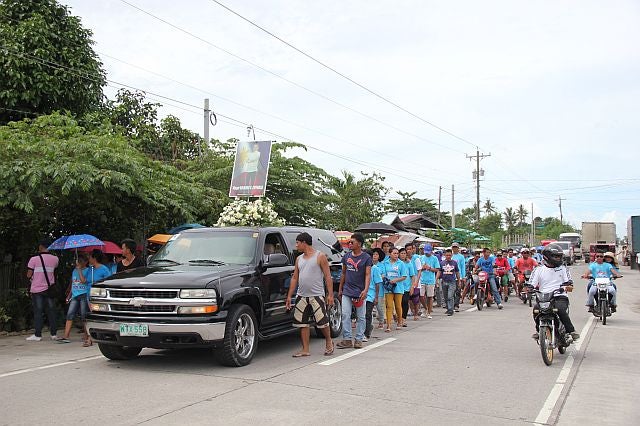 “Of course we are sad that he is now gone. He was a really helpful man to us. We are aware that he was in the (illegal trade) but still he helped us and the way he was murdered was just too much,” another resident, Marlene Velarde, 38, of BarangayTinag-an, said.

Those who joined the funeral procession wore blue T-shirts, said to be the campaign color of Espinosa when he ran for mayor during the May 9, 2016 elections.

People lined the funeral route, some peered through their doors and windows as the funeral procession passed.

Along the procession route, soldiers and policemen in full uniform were seen securing the area.

One of the mayor’s sisters, Juliet Carol Drewberry, expressed the family’s gratitude for their support during their time of bereavement.

“Thank you for coming here,” she briefly spoke after the Requiem Mass, concelebrated by Fr. Dennis Enocando and his assisting parish priests Frs. Dennis Son and James Sian Sital at the Saint James Parish Church.

Fr. Enocando offered their condolences to the family.

“We are with you in this time of your bereavement,” he said. 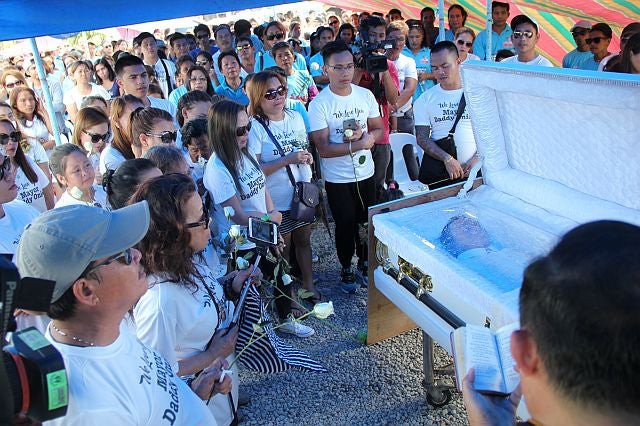 Lawyer Leilani Villarino, who spoke before the members of the media, said the family was happy with the turnout of the people.

“This shows that they loved the mayor,” she said.

Incumbent Mayor Rosa Nemeses was also present during the Requiem Mass but did not proceed to the cemetery.

A Philippine flag draped on the casket, was folded and turned over to the family of the late mayor.

The children of the mayor led in the flying of the white balloons as they shouted “We love you Daddy!”

“On top of the augmented forces during the burial, I have deployed 20 policemen to the family until such time that the threat against them subsides,” said Leyte Police Provincial Director Senior Supt. Franco Simborio. 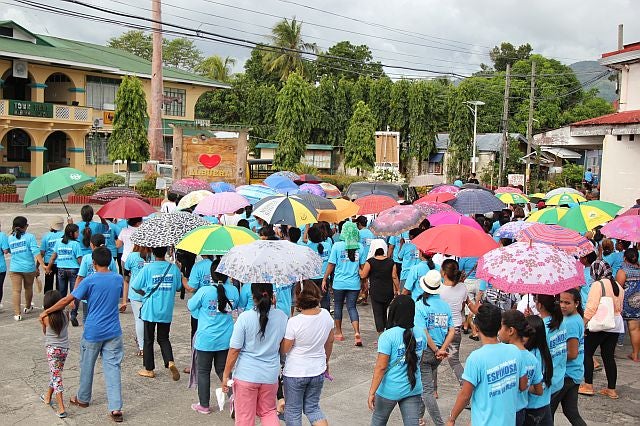